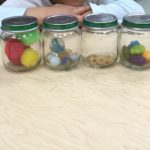 I had the great good fortune to observe a very interesting Estimation Activity the other day at a local child care center.  Before the observation took place, my student and I discussed how estimation can be a pretty engaging activity for young children because it feels like a game – a guessing game. We talked about the counting skills of the children in her group and she felt very confident that they all had a pretty secure sense of number, at least up to 10, and were all able to count reliably.

We discussed ways of creating the jars so the children’s number and counting skills would be challenged appropriately; enough to be stimulating but not too much to be frustrating. My student decided to stick with small items that fit easily into empty baby food jars and chose items that at first glance, seemed easy enough to count.

The children came over to the table at their leisure during free choice and my student explained the game to them.  She defined estimation and explained what they should do.  Each child estimated how many of each item were in each jar.  They then wrote the numbers on small pieces of paper and stuck them to a graph next to their names and under the items. 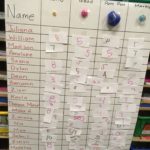 What I found fascinating was how the careful choice of the items created a challenging math exercise for the children.  The pom pons were large and nearly filled the jar but because two of them were red they looked almost like one, making it hard to see where one began and the other ended.  Many children counted the five pom pons as four as they were “tricked” by the red ones.

The beads were straightforward; seven beads in seven colors, easily discernible and easy to count, as evidenced by the chart above.  The marbles were harder as they rolled around the jar a lot and it was hard for the children to know which marbles they had counted and which ones needed counting.  The really challenging jar was filled with Cheerios.  First, there were 8 Cheerios in the jar, which was the biggest number they had to count to.  Second, all of the Cheerios looked the same, so it was nearly impossible for the children to know if they had counted each one once, or if they had recounted some.

These small challenges are important to consider when setting up an activity.  For children with a secure sense of number and solid counting skills, the jars did not allow the children to point to each individual item or to line them up or to separate them for counting.  Many children still use these strategies to ensure they are counting correctly and following the counting rules.  One-to-one correspondence provides a framework for counting so that children know that each separate item has a one number attached to it, no more and no less.  One bead = one and the next bead = two, and so on.  The Order Irrelevant Rule  says that as long as each item is only counted once, it doesn’t matter what order the items are counted in.  This activity challenged both of these rules which is what made it really engaging and interesting both for the teacher, the children, and the observer (me)!

6 Replies to “A Great Estimation Activity”