Last month, I visited my son in New York City for his fall break from school.  The only thing on our agenda was to visit the Museum of Math.  You may remember that I wrote about this museum when it first opened after I saw a segment about it on a news program.  I was very excited to see it in person, enjoy the exhibits, take some pictures, and then share it all with you.

Most of the exhibits are very sophisticated and designed for a mature audience.  However, the entire place was thoughtfully planned with people of all ages in mind. Most, if not all, of the exhibits have a hands-on component that even very young children can enjoy. 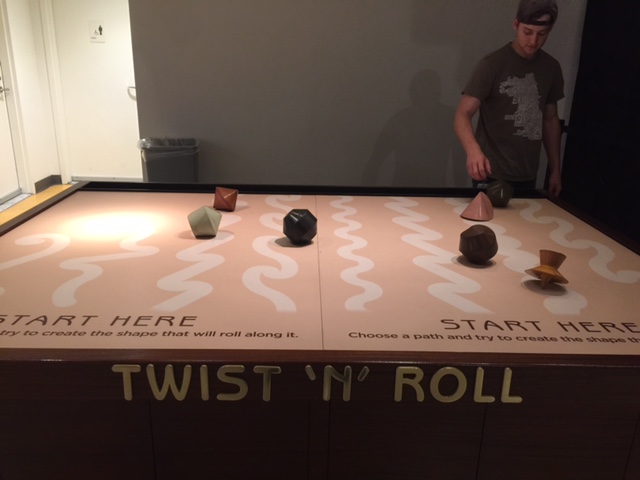 Here, you can see that there are oddly shaped solids that when rolled across the table follow or create a path. The goal of the activity is to determine which shape matches the path is creates.  Both my son and I thought it looked easy but once we began trying, we found that it was much harder than we thought.  Trying to get the shapes to roll on their path was very tricky.

I think a version of this would be quite easy to create and could be a really interesting activity for young children. Using the lid of a large box, draw a thick straight line down the inside of the lid  then a curvy line down the middle.  On the far side, draw a more complicated path from one end to the other.  Using a simple ball, encourage children to move the ball down the 3 paths.  This can be done alone or as a cooperative activity between 2 children as they hold onto the box lid and move the balls along the lines.

Give it a try and let us know how it turns out.