Last week I wrote about a floor-sized number line that creates endless possibilities  for mathematic-related activities in the classroom.  Later that same day, I found this one that is just different enough that I thought I should write about it as well. 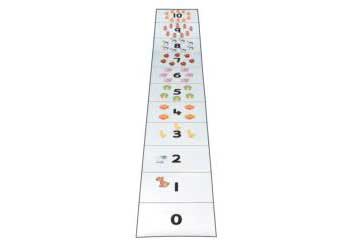 It is pretty big just like the other one, but this one only goes from 0-10.  It offers a different set of mathematical possibilities because of its design differences.  You can see that this one has large numerals and a corresponding number of objects next to each.

There are aspects of this number line that might make more sense to young children.  It only goes up to 10, but the inclusion of “0” complicated matters.  Children generally learn to count beginning with “1” not “0”.  It is also hard to illustrate nothing as the absence of objects is supposed to indicate. You and I can understand that the empty space around the number “0” indicates nothing, but I don’t think young children will.

If I were to make a jumbo number line for my classroom, I would take aspects of this one and aspects of the other, put those together to create the perfect (and appropriate) prototype.

Keep the large, easy-to-read numbers but begin with 1.  Make the number line 6 units long and then add-on units as children develop stronger number sense.  Provide other context clues, ideally removable, so the line can change as needed.  It might be nice to have objects, like in the example above, but it might also be nice to have “pips” like dots on a die, to indicate the number.  It would be cool if the units could be arranged to create a circle or to go around a corner.  That way, if space was an issue, the line could be used on an area rug.

What would you do to create the perfect prototype?

12 Replies to “Another Number Line”