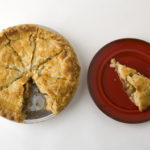 Baking apple pies as a cooking activity is a great idea filled with all sorts of math.  Children can do a lot of the work as well (kneading the dough, pressing it into the pans, stirring  the nutmeg and cinnamon into the apple slices) but today I though we could look at apple pie fractions.

Keep the goals for this activity simple.  I would only use words like “quarter”, “half” and “whole” to describe the fractions.

Cut circles (about the size of a pie tin) out of light brown construction paper.  Leave one “whole” and write the word “whole” on the circle.  You can also write a large number 1 on the pie to indicate that it is “1 whole pie”.

Cut one of the other circles halfway down the middle.  On each half you can write the word “half” and write 1/2 to indicate that each side equals half a pie.

With the third circle, cut the pie into quarters.  Write the word “quarter” on each piece and 1/4 to indicate that it is one quarter of a whole pie.

Place all of the pieces on a table and have the children put the pieces together to make whole pies, half pies and quarter pies.  Allow them to explore the pieces as if they were a puzzle to see how to create a whole pie.  Ask the children to show you a half a pie, or a quarter of a pie.  Watch what happens.  Which children are able to identify the different fractions?  Who needs more experience and exposure?

Later, bring out a real pie and cut it into pieces that represent halves and quarters.  If you bake mini pies, children can choose to have a “whole” pie to themselves.