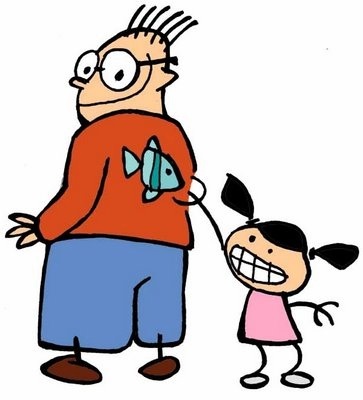 This Monday is April Fool’s Day- the day when playing practical jokes  is not only acceptable but expected.  There are several accepted origins to this day-from references to Chaucer’s Canterbury Tales to the Roman holiday of Hilaria.

In Europe, a traditional practical joke that is played amongst school children, families and colleagues in the workplace is to try and tape a paper fish to someone’s back without being noticed.  That is why April 1st is called “April Fish Day” in France, Italy, and Belgium.

It might be fun to create a game out of the fish tradition with the children in our programs.  Rather than playing “Doggy, Doggy, Where’s my Bone?” you could adapt it to play, “Kitty, Kitty, Where’s my Fish?”.

If you are unfamiliar with this game it is quite simple.  Everyone sits in a circle, puts their hands behind their backs, and closes their eyes.  Very quietly, you give one child a fish (or a bone for the Doggy version) and once it is well hidden behind that child’s back, you ask everyone to open their eyes.  At this point, everyone says together, “Kitty, Kitty, Where’s my Fish?”  One child gets to guess who has the fish.  If s/he gets it right, you play again, and that child gets to choose where the fish goes for that round.  If s/he gets it wrong, another child gets to guess, until the fish is found.

This game involves “guessing” (or predicting), and the process of “elimination”, both great mathematical skills.  Give it a try and let us know how it goes.