As a parent, the idea of “practicing” skills over the summer was dreadful and daunting. Forcing my children to do workbook pages, flashcards or mandated work from school was not my idea of how to best spend our summer vacation. But as a teacher, I want children to practice their skills over the summer so they are sharp and ready for their upcoming year. Not surprising that reading seems to be easier to include into summer. We would have designated times each day where we would all read and weekly trips to the library to check out new books was a part of our summer routine. Math seems to be the activity that gets neglected and according to research, math skills drop more over the summer than any other academic skill.

There are many ways in which to keep up math skills without resorting to workbooks or relying solely on iPad apps. (Though there are so many comprehensive math apps available and the iPad is a great “down time” activity!) Games, sports, cooking & baking, planning a trip, math stories, museum trips, time telling to plan their day, and lemonade stands and trips to the candy and/or toy store or all fun activities to reinforce numeracy skills. 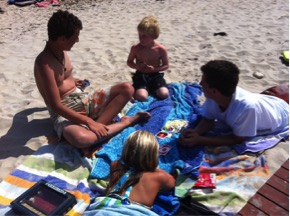 For years, my college friends and our children go on a beach vacation to Rhode Island. And each year, the trip to the coveted candy store is “must do” activity. The trip to the candy store does not come without a lot of frontloading as to how much money they can spend, what kind of candy they can buy, and when they can eat the candy. This year, I brought my 6-year-old godson and since I only see him one or two times a year, and my job is to spoil him, none of the previous rules I had for my own children applied. 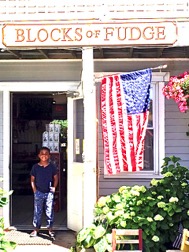 Instead, I gave him $5.00 and told him that he could buy whatever he wanted but he had to ask the price of each item and ask the person at the counter to let him know when he had gone over $5.00. Luckily, the woman at the counter was very accommodating and not too busy to help us out. As he was picking up items and asking their cost, I was calculating his possible candy stash on my iPhone calculator and showing him what his items totaled and how much more money he had to spend before he got to $5.00. Unfortunately or fortunately for the sake of this experience, $5.00 does not go far in this particular candy store. He chose Hubba Bubba Bubble Gum for $2.65 and a Whistle Pop for $1.50 for a total of $4.15. I calculated and then showed him that $5.00 minus $4.15 was $0.85 and that was the amount he had left to spend on another piece of candy. I told him that he could spend it now or save it for another trip to the candy store at a later date. He chose to save it and a good thing too because after a brief survey, there wasn’t anything in that candy store that was under $1.50. I had him put his $0.85 in his pocket and he happily exited the candy store with a mouth full of bubble gum. I think that next year I will have him earn the money by doing small chores such as taking the garbage out, sweeping the deck and after he has earned a bit of money, I’ll take him to the candy store. Teaching children the basics such as how to budget, spend and save will establish good money habits for life.

Another “summer slide” activity we like to do on vacation is play games. We are a game playing family and love the down time of vacation to relax and play the games we love. 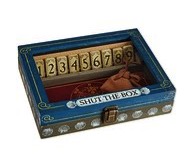 Shut the Box has been a favorite beach game for forever and appeals to all age groups.

This game can be played with a partner, alone, or with a group and teaches math and logic skills. Younger children can use it as a counting game while older children can use it as a game of strategy. The fun part is that the game takes about five minutes to learn but can take a while to learn how to “Shut the Box”. Players roll two dice (at first) and flip down numbers that equal the sum of the total rolled. Each player continues until he can no longer flip down a tile and then adds up the total of the remaining numbers. The box passes to the next player and the winner is the one with the lowest score (unless someone “shuts the box” and automatically wins by successfully flipping all of the numbers down) I’ve actually seen this game at my local bar and have witnessed adults get into heated round robin competitions of Shut the Box.

This year, my friend introduced us to a new game that quickly became an obsessive hit.

Simplexity is absolutely addicting. It is easy to learn, but sophisticated with multiplayer layers of strategies and can get very competitive (which we like!) The object of Simplexity is simple; be the first player to connect four pieces in row by shape or by color. But, be careful, your next move may actually help your opponent. The nice thing about both of these games is that they are sturdy and are made of wood so that they last a long time and transport is easy. There are so many great games that children can play to reinforce skills whether it be number sense, spatial reasoning, or good sportsmanship, the trick is to find one that your child enjoys playing.

Along with playing games, I love logic puzzles, mind teasers, and math word problems. Last summer I blogged about logic puzzles, brain teasers, & games. They boost brain activity, increase fluency and memory, improves concentration, promotes harmonious group dynamics, and gives one a sense of pride whe they have successfully completed a challenge. Instead of giving my 4th graders a math packet for the summer, I give them a one big math problem to solve. They can work on it throughout the summer and they can work on it with friends and family but they need to clearly show their work and explain how they got to their answer. I give them Marilyn Burns’ The Double-Dip Ice Cream Problem from the book, About Teaching Mathematics. Marilyn Burns is a well respected math educator and has many math books for children of all ages. She is a wonderful resource for skill and concept extensions, games, and logic problems. She has her own blog that I often use as a resource www.marilynburnsmathblog.com.

The Double-Dip Ice Cream Problem: In an ice-cream store that has 31 flavors,

how many different combinations of double-scoop ice cream cones can you get?

I send this to my upcoming class and have them bring it in the first day of school. I take a look at their work and then group them accordingly as to how they solved the problem. I also tell them that, for this activity, I am far more interested in their process than in their final product. Some kids draw out the whole problem with different colors representing each double-dip ice cream cone until they get to the final answer. Some kids will start out making a picture, will recognize that there is a pattern involved and switch over to a table t-chart to continue the pattern until they’ve reached the answer and some of the children solve the problem using an algebraic operation. Nine out of ten times, the ones who try and solve using the operation, do not get the answer correct and have little work to show for their thinking. I group the children accordingly and have the children go over the problem and compare answers. Each group need to agree on one answer and then explain how they got the answer. The Double-Dip Ice Cream Problem has proven to be an insightful diagnostic tool and tells me a lot about the children as mathematical learners. The problem is also a low stakes way of getting them back into the swing of mathematical thinking. Once all the groups have presented, we come up with the most efficient way to solve the problem and make a class graph that represents our thinking.

It is important to have children thinking about math all throughout the summer and there are many creative ways to make sure that that happens. Here are some websites to give you some additional ideas:

9 Replies to “Avoiding the Summer Slide”