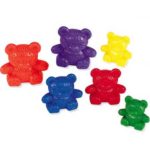 The Bear Family Counters are colorful manipulatives that usually come in different colors, sizes and weights.  They come in a variety of shapes as well. I’ve seen dinosaurs and various other animals….they can all be used in the same ways.

The bears are also proportionally weighted so they are a perfect item to be weighed on a scale. We will be looking at the Bucket Balance next week.

Give it a try and let us know what you think.