The other day I observed a room of younger toddlers, none of whom was older than 20 months.  One child spent his whole morning playing with this large set of beads. 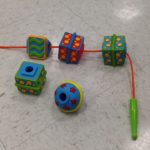 They come with a long string that is easily pushed through the large holes.  The string has a helpful plastic cylinder on the end that fits into the holes and stays put.  ‘ 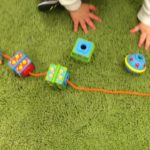 The child spent the morning stringing the beads and then dragging the whole thing around like a puppy dog. 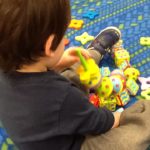 He had the best time.

Sometimes when working with infants and toddlers rather than thinking about “beading as a means of creating patterns,” it is enough that they experience beading as an engaging activity.  I watched this child attend to his task for far longer than anyone thinks an 18 month should be able to.  He negotiated with his classmates when one of them tried to take his beads away – he wasn’t having any of that!  He manipulated the beads, one after another onto that string, and then pulled and pulled and pulled so he could get one more bead on.  He found an adult when he wanted help getting them off and was perfectly happy to start all over again.  He showed the tenacity and the perseverance of a much older child and although he got frustrated for s quick second, he was completely immersed and engaged in his play for the better part of an hour.

Yes, recognizing and creating patterns is important. But the other day, so was all of the rest of this stuff.

One Reply to “Big Beads for Little Hands”