How is rhythm and rhyme connected to early math learning? 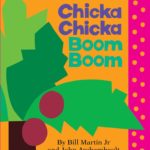 Our favorite rhythmic book, when the boys were little, was Chicka Chicka Boom Boom.  I read that book so many times that I know every word by heart.  We purchased several copies over those early years, since they did get a little worn out from overuse.  We had the large version, the hardback version, the small board book version, the paperback version, and we even had a copy of Bill Cosby reading it on cassette tape (remember cassette tapes?).

Predictability and sequencing are early math skills.  As children begin to familiarize themselves with a book, they begin to expect the sequence of words in a set order.  This is one important reason that we should never skip pages, as they will be let down that the book does not follow the pattern that they have come to expect.

In Chicka Chicka Boom Boom, there are several sets of predictable events.  The first is that the letters appear in alphabetical order.  Many young children are beginning to learn their ABCs in the order of the alphabet.  This is a much more specific skill than learning the ABC song.  (Knowing this song is often confused as knowing the alphabet).  Therefore, the fact that “A told B and B told C” makes logical sense to children.  This relationship of the letters to one another is fundamentally mathematical.

Next, there is a logical rhyming sequence to the words.  The rhymes are sing-song and make sense when read aloud.  In addition, completing the rhymes with a repetitive sentence, reinforces the predictability, the rhyming pattern and the sense of story.  “I’ll meet you at the top of the coconut tree” repeats throughout the book so that children come to expect it.  What can I say.  The whole thing works.

This crossover between literacy and math is central to the idea of an integrated curriculum.  Yes, reading books is a language-based activity focused on language learning, reading and writing. But recognizing that books can support other cognitive areas of development makes reading them a whole lot more interesting.

5 Replies to “Books that Support Math with Rhythm and Rhyme”