I know that I have written about my love of Eric Carle in the past but this month’s theme of comparing and contrasting using children’s books reminded me of a wonderful interaction I observed last year while visiting one of my practicum students.

The children in her classroom had been studying Eric Carle for a while, focusing primarily on the Bear books: Brown Bear, Polar Bear, Panda Bear, and Baby Bear. There was evidence of their ongoing exploration in the classroom. Below you can see a chart where the children voted for their favorite bear. 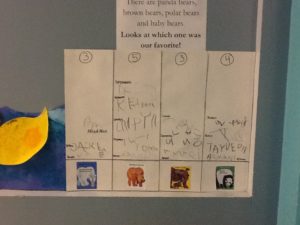 Here you can see another way that the children voted, this time between 2 books. 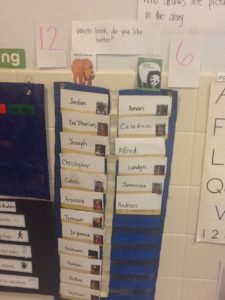 The teacher used two proven methods for voting both with visual clues that helped the children see which books were favored.  In the first example, the children wrote their names above the books, so it created a graph-like visual, and in the second, they put their name cards in slots below the titles which could easily be counted.

So not only was the exploration filled with mathematics, but the children also discovered the same author wrote versions of this story that could be compared and contrasted.  In Brown Bear – the bear sees.  In Polar Bear the bear hears.  It is the same but different.

My student took it all a step further and created a matching game with images from the story.  She started with images which were exactly the same, 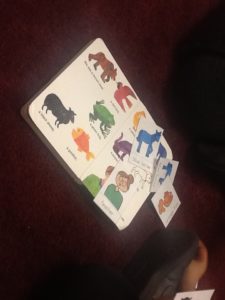 and then used images that were the same but different.  She found real images of a frog, and a red bird, a duck and a sheep.  These small changes presented some very interesting challenges for the children because they could identify the images for what they, were but found it very difficult to see that they were the same as the drawn pictures.  Watch the video below to see how the girl passes over the match a couple of times and needs the support of her teacher to find the matching green frog.