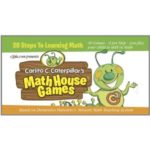 Last year, when this project was in its infancy, the Chicago Tribune interviewed Dr. Kathleen Sheridan (formerly of NLU and now of UIC) and myself about the grant and our plans for Early Math Counts.  That article generated a lot of interest in the project both from potential users of the site as well as from supporters of the site.

One of those contacts turned out to be a wonderful man named Domenico Marcario, M.S. who developed the c3pla Sensory Math Teaching System.  According to his bio;

Domenico Marcario taught math at the middle and high school levels for thirty-two years in the Locust Valley School District in New York State. While there, he re-searched curricula from around the world and co-authored and implemented a highly success-ful middle school math program. Since retirement, he has expanded his research to elementary school. He has written Carlito C. Caterpillar Math House Games, a program aimed at the K-2 level consisting of 20 steps, with each step engaging students in an activity or game to discover a fundamental math concepts, while acquiring skills at the same time.

The background and philosophy of the program can be accessed here by clicking on Sensory Math Philosophy and Validation. In addition, Mr. Marcario sent us 150 sets of Carlitos’ C. Caterpillar’s Math House Games that were distributed with the Math Kits.  Take a look at their website here.

These beautiful cards are divided into sections or “Stages”,  1) Quantity 2) Numeration and 3) Operations. The Stages are further divided into Steps (which are actually quick and easy lesson plans).  Each of the Steps has two lessons associated with  it which are described with step-by-step instructions.  They are perfect for working one-on-one with young children or in small groups.

Next week, we are going to look at some samples from the cards and ways in which to order cards for your own use.