When we began playing checkers with the boys they were only really interested when they got to yell, “King Me!”  Otherwise, they never got too excited about Checkers, Chinese Checkers, or Chess.  I don’t know if this was because Checkers and Chess are played with only 2 players (and I would sometimes suggest that they play together – G-d forbid!) and Chinese Checkers frustrated them because one small bump of the board sent all of the marbles askew.

A traditional board (also called “Draughts”) is made up of 10 X 10 squares.  One player has light checkers and the other has dark checkers.  Players take turns moving their checkers around the board trying to find an opponent’s checker that can be captured.  If you are so lucky that you move one of your checkers to the other side of the board, you get to yell, “King Me!” and your opponent has to give one of your checkers back by piling it on top of that checker (Get it?  It is like a crown on top of a king.) 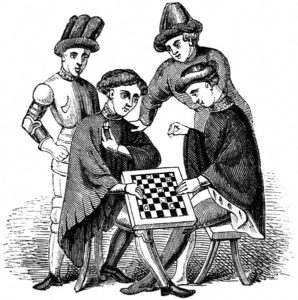 I don’t really think that very young children can play a full game of checkers.  It is long and tedious.  I have no doubt, however, that if you introduce checkers and boards into your math center, the children will create their own games with the pieces.  They may even be more interesting than this ancient game that has been played for hundreds of years around the globe.