Goal 8 of the Early Learning and Development Standards is to Identify and describe common attributes, patterns and relationships in objects.

8.A.ECa – Sort, order, compare and describe objects according to characteristics or attributes.

Replicate patterns in music (e.g., repeat a sound pattern by clapping or tapping foot lightly; sing a repetitive song such as B-I-N-G-O; play finger game such as Open, Shut Them).

Sort objects according to different characteristics (e.g., sort crayons by color and size; sort small blocks by shape and color).

Order objects in a series by a single attribute (e.g., order fire trucks from shortest to longest; order rocks from smooth to rough).

Patterns, groups, attributes- these concepts can be seen all over the ece classroom.  With the right materials children will naturally sort, classify, and organize their stuff into groups or patterns without much prompting from the adults around them. 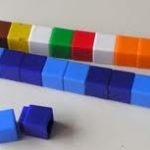 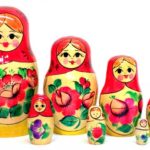 Nesting Dolls- From big to small 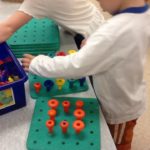 Peg Board – Only the orange ones.

Click here, here, or here to read more about sorting and attributes.