I have consistently found that young children are always fascinated by anyone viewing photographs or videos on a smartphone. “Can I see, can I see?” they say as they mosey their way into your lap. Where children viewing what has been taken by a camera is important, it is also just as important to get them behind the camera taking the shots and making decisions about what is being captured.

At Catherine Cook School in Chicago, we introduce the concept of stop motion videos at the age of four in Junior Kindergarten. 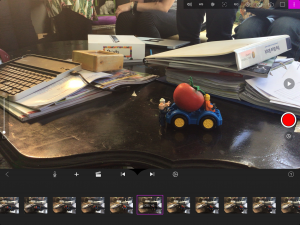 This introduction is done very carefully, paying close attention to what children this age can understand as well as what experiences the children have had previously with photography and videography.  In the introduction, we talk about the difference between videos created with a smartphone or video camera and a stop motion video.  Consider these examples as possible language to use to introduce the concept of a stop motion video. “I am sure you have seen a family member take out a phone and take a photo or video of you at some point.  When you watch a video, you will see that it is all continuous, as ever single movement is captured by the camera.  In a stop motion video, we take many photographs all after small movements has been made to a given scene.”

At Catherine Cook, we introduce these videos in curriculum based context.  For example, during a unit on sea creatures, Junior Kindergarteners in Ms Fisher’s class created a video that focused on the movements and actions of particular creatures in the sea.  Before this video was recorded using Stop Motion Studio, the group had to make some decisions.

“When making a stop motion video, we can decide to incorporate a short story to be told in the video.  Use what you know about the sea creatures you have been learning about to decide what that short story might be.”

After giving the group some time to think, we invited them to share their ideas.  Once we sifted through their ideas, we created our short story line.  Using our short story line, we created a plan for how we were going to move the characters we decided on. Take a look at the VIDEO we created!  Can you determine the storyline?  Spoiler Alert: The story line created by the group was that the large sea creatures are chasing the small ones, and then the small ones decided they wanted to chase the large ones.  After the chase is complete, they decided that all of them would join in a line and leave the stage.

In order to learn more about how Stop Motion Studio works, watch this video.

This video created by four-year-olds included a basic mathematical skill addressing sorting by the attribute of size.  There are several other mathematical concepts that can be integrated into the creation of a stop motion video using a child’s favorite snacks, consider these examples:

–     Use pretzels to create a video creating shapes such as squares, rectangles, diamonds, and trapezoids

o  Include gummy worms to add angles to shapes to create circles, ovals, and hearts

–     Use Lego bricks, starting a pile and slowly sort them by color, size, or number of pegs on the top.

What ideas can you come up with?

Create your video and share with family and friends via email, YouTube, Vimeo, or social media! ENJOY!!

P.S.  For those parents and teachers who are interested in taking these videos one step further to add sound effects, music, and other features by importing it into iMovie, an Apple-based video editing application, take a look at this video