Welcome to week three! Hope you had fun playing the matching dot games. Do you see dots
everywhere now? Get ready for another dot-filled week!

For this week’s activity we are going to reinvent the game of bingo. Again, we will not be using
symbolic representation of numbers. Instead, we will be representing numbers with dots to
deepen your child’s number sense.

Traditionally, bingo is played with the numbers one through seventy-five. However, for this
game, we will be using numbers one through six. There are several reasons behind this. One of
the reasons is that young children need several experiences working with small sets of numbers
in order to truly understand what those numbers represent in terms of quantity. Introducing only
numbers one through six affords that kind of rich experience we are after. Second, subtilizing is
intuitive and in order to use this skill, we need to provide small set of numbers rather than large
ones. This way, children will use this skill to perfect their understanding of numbers and what
they represent mathematically rather than symbolically.

With this game you will need a printer, dice, and bingo counters.

Once you have downloaded the template, print as many copies as you need (one per player).
The object of the game is simple, the first person to get five squares in a row covered, wins. You
can do this horizontally, diagonally, or vertically. Each person takes a turn rolling the dice. When
the number on the dice is shown, the person who rolled must find a square on their chart that has
the same number and cover it with a bingo counter. Each player takes a turn until one of the
players gets five squares covered in a row. 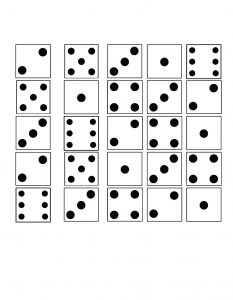