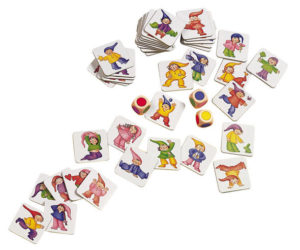 This is a game of observation and speed, both of which are really hard for young children. Each of the cards has a gnome-like character on it wearing pants, a top, and a hat.  They are all doing something different like standing on their heads, or jumping in the air so that each card is not only distinct by colors but by action as well.

Matching the colors to the cards is quite difficult. When the game begins there are 56 cards to look through so it takes some time.  As the cards thin, it becomes easier to see where the correct card is and to distinguish the colors, etc.  The children have been looking through them for a while at that point, so they have an idea where the card with the red hat, the red pants, and the yellow top is.  They may even memorize many of the cards and their placements.

This one is also by Selecta Spielzeug, a German company, and I suspect that is why it was translated to “dwarves” rather than “gnomes” or something more appropriate.  When you see the pictures you know that they are referring to small elfin creatures rather than little people.

2 Replies to “Dwarves and Dice”