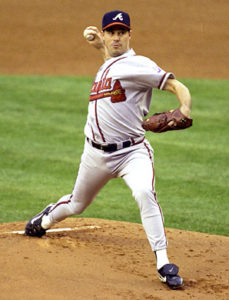 It was a big weekend for a couple of Chicago’s favorite ball players.  Frank Thomas, also known as the Big Hurt, and Greg Maddux received baseball’s highest honor when they were inducted into the Baseball Hall of Fame. If you’ve never been to Cooperstown, the Hall of Fame is actually a “hall” in a larger baseball museum where plaques hang commemorating baseball’s greats.

So what is the connection between Greg Maddux, the Hall of Fame, and Math Language?

Did you catch it? Did you see it?

Math language experts will tell you that the plaque should read:

“Fewer” is used when referring to things or items in the plural, i.e., walks, home runs, strikeouts, RBIs, and errors.  “Less than” is used when speaking about items that can’t be counted, i.e., sunshine, rain, and happiness.

The writers of the plaques would have benefitted from early math language exposure – used correctly.  A couple of lessons in comma usage might also be a good idea.