When I think about they ways I would do things now, as opposed to 20 years ago when I was a teacher, I could kick my former self for not knowing more. It has taken years and years of observations and teaching about best practices to feel like I would have a handle on the tools I would use to support the children’s learning and development, as well as tools that would support the structure and processes of my classroom.

So if I were to create one new tool for this school year, I would create a set of number cards, and laminate them. I would make them out of large 5 X 8 white index cards and number them from 1-20 (more if I had more than 20 children in the class). 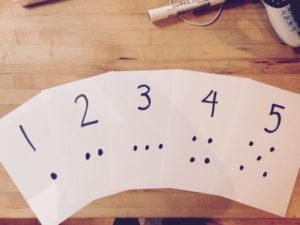 These can be used throughout the day for all sorts of classroom activities, from lining up (shuffle the cards, distribute and let the children figure out where they are in the line) to dividing into groups (odds and evens).  Clearly, the youngest children would not be ready for odds and evens, but used appropriately, the use of the cards can follow the development of the children, rather than the other way around.

Start small.  Begin by handing out the cards and help the children identify their number.  If they don’t recognize the numeral, try and see if they can count the dots (pips).  I created these dots to replicate the pips on a die, but you can also put them in lines up to 10 which is a strategy for supporting Base 10 understandings.  This format can also provide additional cues to odd and even because you can see if the dot has a partner (even) or if it stands along (odd). 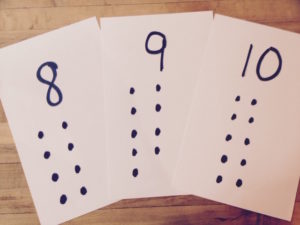 You can add other visual clues, such as color.  Make all of the even numbers shades of blues and greens, and all of the odd numbers shades of reds and oranges.  Once distributed, the children can divide themselves into groups based on numbers or colors, or both.  This mingle and sort activity can be used daily, during large group time, transitions, or taking turns.

As the children get older (older 4s and 5s) use another set of cards with tally marks and Roman numerals. 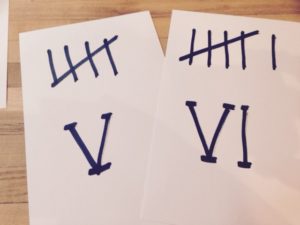