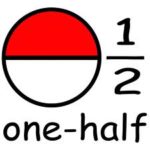 This morning, my husband Larry told me the back story of how his father came up with his “one cuts, one chooses” system of justice.  He said that he has vivid memories of his father cutting paper plates in half, one after the other, trying to explain to his sister Caren, the notion that there is no such thing as “the bigger half”.

As legend tells it, Caren was stubborn.  How stubborn is up for debate, but on a scale of 1-10 in stubbornness, I guess she was off the charts.  She insisted that Larry always got the “bigger half” convinced that there was such a thing.  By definition, that is impossible, but how do you explain that to a stubborn child who feels slighted and shorted?

You cut up a thousand paper plates to prove, over and over, that half is half.  And if you don’t want to believe it, then you have one child make the cut and the other child has to  choose his half.  And all things being equal, each child will get exactly the same amount.  There is no such thing as “the bigger half”.