Children might be frightened by some of the scary parts of Halloween so think about your group before you put together your this game.

I saw this one on Pinterest.  It looks easy enough to put together and might be fun (it is also filled with math!)

Give each child an ice cube tray (this one has pumpkin shaped cubes) and fill a bowl with squishy eyeballs.  These are also available as bouncy balls.  Children take turns rolling the dice and then placing the corresponding number of eyeballs in their tray.  With younger children, the goal can be to fill their tray.  For older children, you can add another dimension by having the children fill their trays exactly.  That means they have to roll the exact number to fill the tray or they have to count out the eyeballs, fill the tray and then take away the remainders.  This way, they continue to play instead of simply waiting. 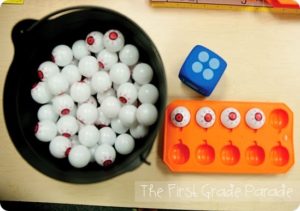 2 Replies to “Make Your Own Spooky Halloween Game”