There are all sorts of marble towers, marble runs, and super marble runs in the market place.  You can usually purchase a starter kit with a certain number of bridges, spirals, and base pieces included and later add to your collection with supplemental kits designed to enhance and expand the play. These toys promote design skills and planning, reasoning and physics. Children must design the run so the marble moves downward using gravity and momentum as its power.  The bridges must be placed just so, with the openings in the correct spots so the marbles don’t get blocked.  Some are quite difficult to assemble and will need the help and support of an adult, while others can be managed by the children themselves. 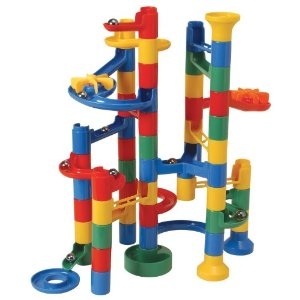 The picture above is a typical marble tower composed of a couple of kits.  There are several other styles…. 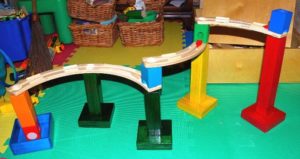 the wooden marble run, or…

the mega super marble run, or…

the musical, wooden, marble tree.  Each has its pros and its cons but all will be classroom favorites.  This three-year old child built his marble run all by himself.  He was so proud of how it worked.

So, do they make this for infants and toddlers, too?

You bet.  Although not exactly the same, there are several toys that support the same skills as the marble run.  There are all sorts of toys that allow the younger child to place a ball or a rolling car onto a ramp and then watch it go down. 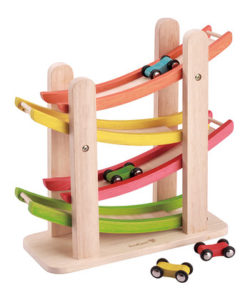 This toy is beautifully built and is easily used by toddlers.  The cars roll easily down the top ramp and then flip over to the next level.  Very young children will enjoy watching the cars move. 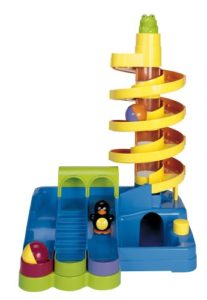 This was the first ball run that we had as a family.  The balls each look a bit different and move a bit different.  My boys liked to watch it when they were very little, but once they were old enough to manipulate it themselves, they played with it for quite some time.

Naturally, they eventually graduated to some pretty sophisticated marble runs that provided hours and hours of design, building, and play.