As an early childhood educator, I have witnessed the complicated nature of children’s development and learning.  Child development does not exist in a silo.  Instead, child development exists as an interwoven fabric of interactions, skills, relationships, knowledge, experience and action.  I have found it interesting that as teachers, we have developed the pedagogy of teaching specific subjects in early elementary school, where when a child is taking say math, they only study math.  Why isn’t math woven into everyday activity and play so that it is not developed in a silo but in conjunction with meaningful work and experience?

Everyday children use language to communicate about and understand the world around them.

I remember working with a group of toddlers who were between the ages of 18-30 months old.  These toddlers were very interested in anything involving trains, especially Thomas the Train. I suppose this dates me a little bit! Nevertheless, everything we did turned into trains and we found that integrating concepts, such as those with mathematics, kept the children more engaged.  Mathematical concepts really came alive with trains! We talked about the shapes of the cars, counted how many cars, put cars in order and much more.  We talked about trains and used vocabulary which the children already knew from reading the Thomas the train books and watching the television series.  We were able to use picture books about trains to also extend their learning.  Their favorite was Freight Train, by Donald Crews.  The large pictures, varying shapes, colors and patterns really appealed to their interest and allowed us to integrate concepts which meant something to them directly. Our use of language brought math and their love of trains together to encourage learning. Before we knew it shapes and order were concepts these young children could demonstrate with more than just trains! 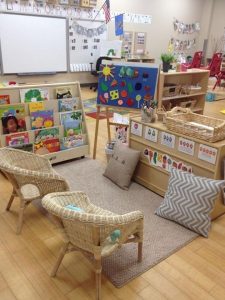 Use language to talk about mathematical concepts!

From early on, children start pointing to and naming everything around them.  You can provide a narrative for children; pointing out the mathematical concepts all around, including shapes, sizes, numerals, counting, sequencing tasks and sorting. For example, you can:

Recognize that math is all around and using language to talk about mathematical concepts will help children to recognize them on their own.

One Reply to “Math and Language Development Support One Another”