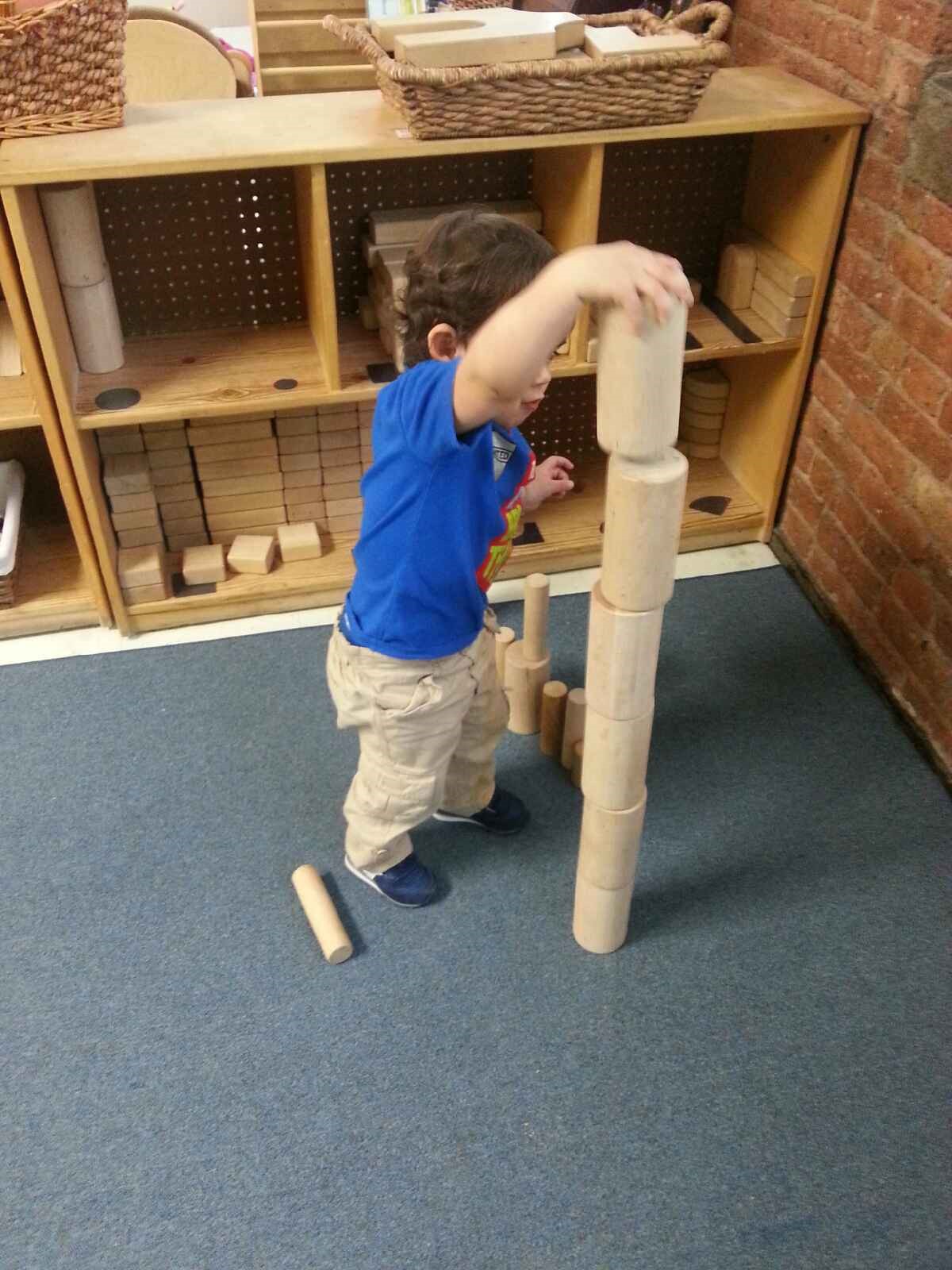 I struggled as a teacher to use three-dimensional shape names. I still struggle with this and may need to look up three-dimensional names. What’s a cuboid and a rectangular prism? Most adults would know cube, sphere, and cylinder, but maybe not much more than that. In block play, some teachers, including myself, will refer to blocks by a two-dimensional name. This isn’t to say that we should be using specific names for blocks at all times. We should expose young children to these words when appropriate, but it shouldn’t inhibit a child’s active building with blocks. This is more to say that specific math-related vocabulary should be used in block play with young children because they can understand this vocabulary. This can include three-dimensional shape language, but it can also include descriptive and comparative language, such as tall-taller-tallest. This type of language should be used with young children of all ages.

This language describes concepts that children are actively exploring. A young child may not be able to explain specifically concepts of height and number sense, but is exploring these concepts when creating a tower. Young children need words that describe their actions. It is, therefore, the role of the educator to provide this vocabulary. For younger children, it likely is through parallel talk, and for older preschoolers, this may be a conversation with the adult posing mathematically-relevant questions as the child is building.

Let’s examine a younger child’s interaction and explorations in block play. In the following photos, a 22-month old child is exploring blocks as is using cylinders exclusively to build.

Before looking at a series of photos, let’s consider the following:

As a quick side note, use unit blocks with young children as soon as they can manipulate them! Young children need to learn the physical qualities of blocks and how to use them. Some teachers of toddlers may be hesitant to use wooden blocks as they believe that children can hurt themselves with wooden unit blocks. They instead may use foam or cardboard blocks – these blocks certainly can be used but they are more difficult to build with as they are not sturdy like wooden blocks. Toddlers will be more successful at building with wooden blocks as they are less likely to get knocked over easily.

Now, let’s get back to our 22-month old building with cylinder blocks. 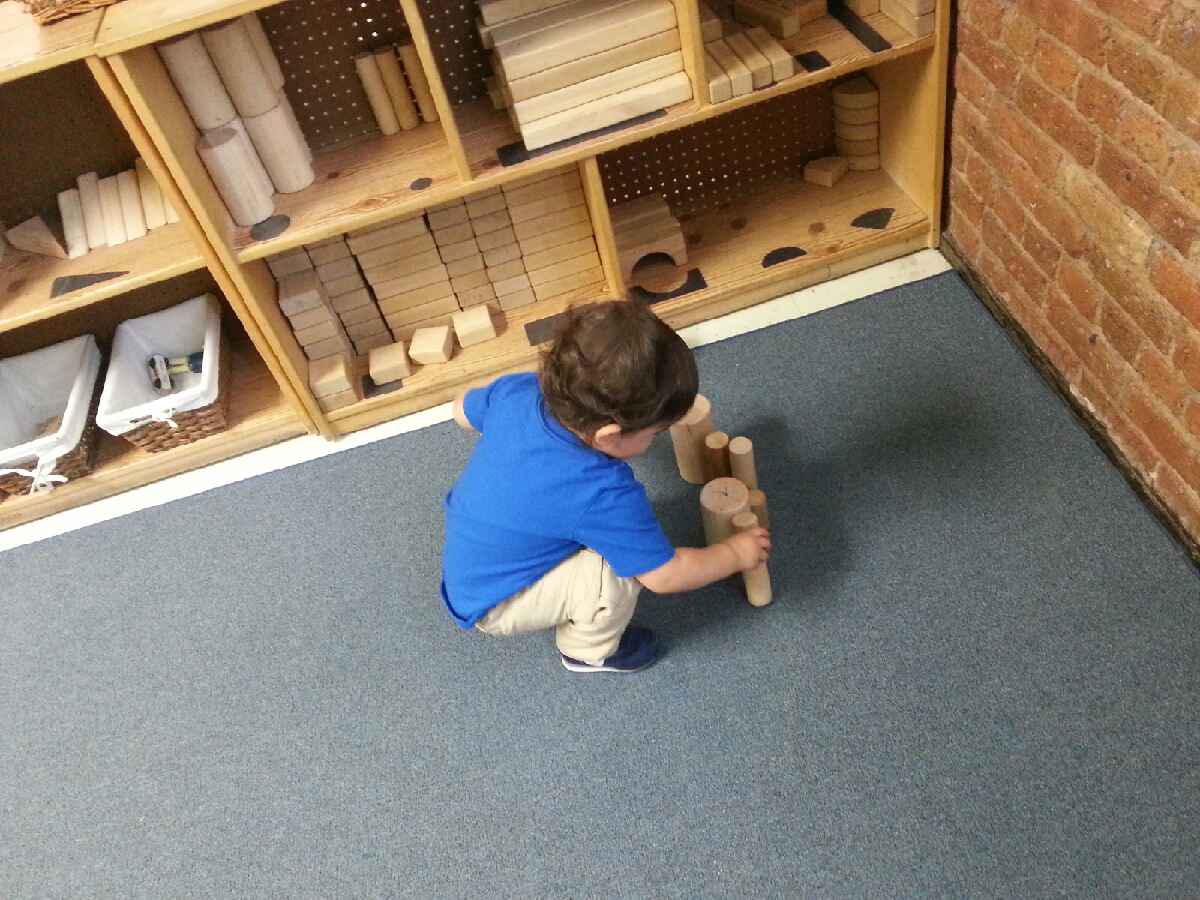 He is creating a row of blocks, standing them upright. In standing them upright, he is exploring qualities of a cylinder. While he cannot explain to an adult what these specific qualities are, he has discovered that cylinders need to be placed with the flat circle face on the floor, otherwise they may roll away. A teacher, in this case, would use parallel talk, using this mathematical language, to describe what he is doing, giving words to describe his actions. From this photo, he is also lining them up, so there is some order to the way he is building. 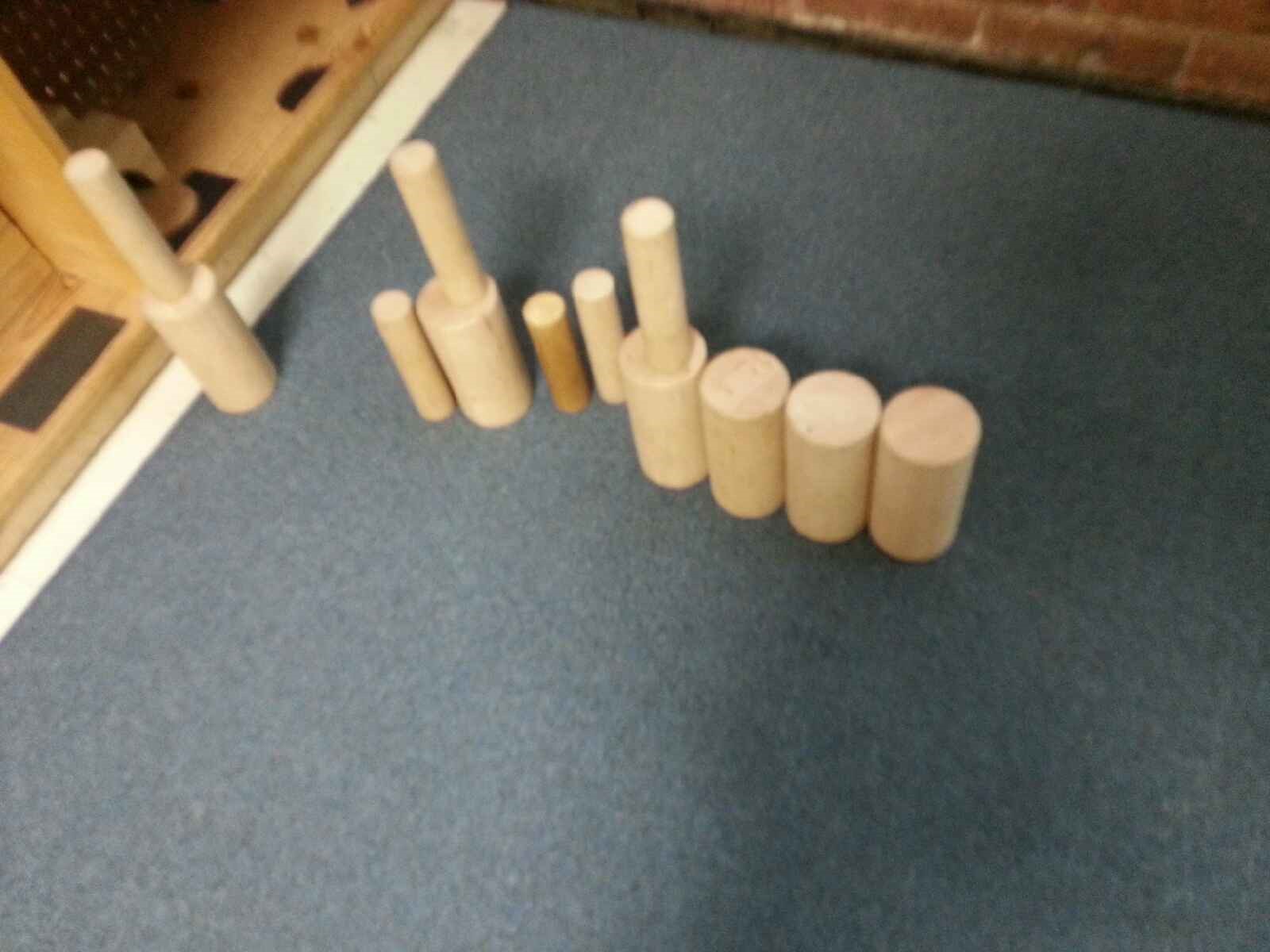 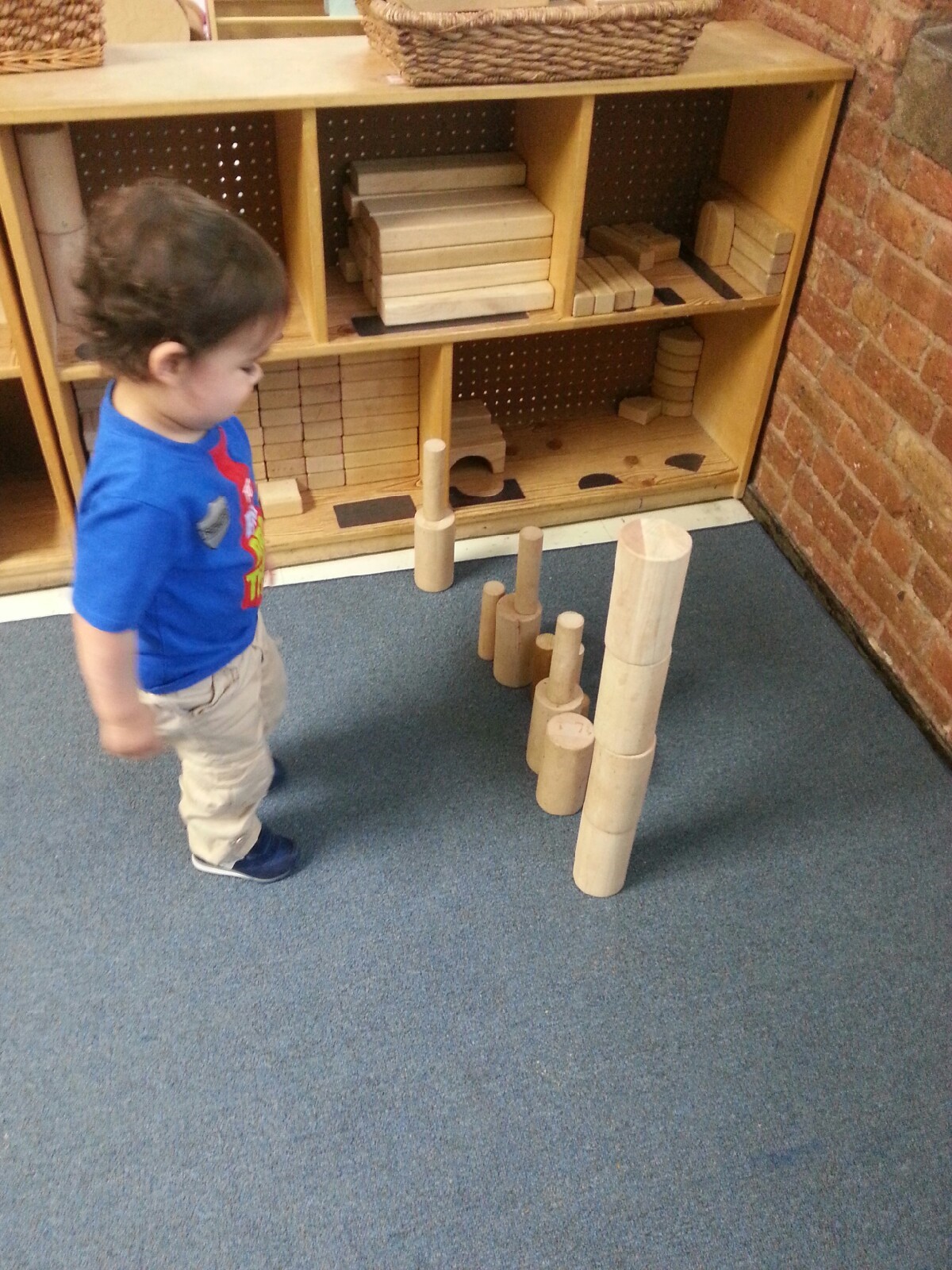 We now see that he has begun stacking larger cylinder blocks. His initial exploration of creating a row of cylinders has shifted and now he is focused on stacking cylinders. He has added cylinders on top of each other and has created a taller stack with each added block. A teacher’s parallel talk would now focus on adding more blocks and height as the stack grows taller. He has also stopped to look at what he has created, providing an opportunity for a teacher’s parallel talk to act as a reflection on the building process. A teacher could say, “You built a tower with cylinders! You used large cylinders and stacked them on top of each. You started on the ground and added cylinders on top and now it kept getting taller.” 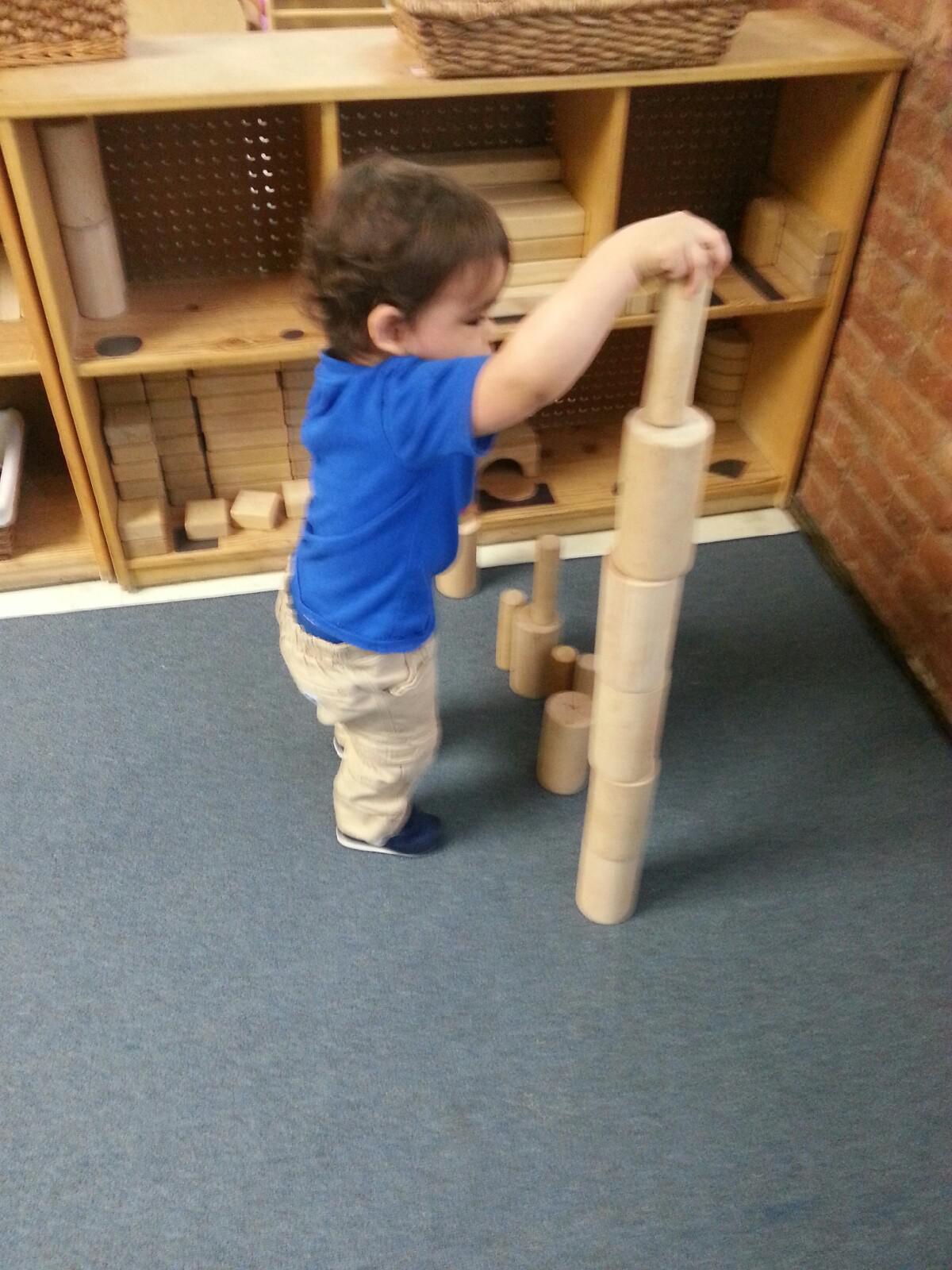 He has now added a fifth cylinder as is attempting to add a sixth. At first, he chooses a smaller cylinder then changes his mind and adds another larger cylinder. In doing this, he has shown that he knows the difference between the two sizes of cylinders in addition to continuing to explore height. At this point, he stopped constructing as he could no longer add blocks on top of his stack.

In this series of photos we see the building process of a 22-month old and how a teacher can support mathematical knowledge through their own engagement in the child’s building process. A teacher in this interaction needs to be attentive to what the child is interested in building and what math concepts match different types of building, such as the math concepts that may be different between creating a row of blocks versus creating a tower by stacking blocks (length v. height).

We see in this interaction that a 22-month old can definitely explore math concepts, and can successfully build with wooden unit blocks. Mathematical can and should be used when working with younger children as it gives them specific vocabulary to describe their actions. We will explore in a later post the building process of an older preschooler.