In this past 2 posts, I’ve discussed math in block play and we’ve explored the building process of a younger child. In this post, we’ll examine spatial awareness and patterns in block play and examine more block photos of preschool children’s constructions.

What do we see in the following photo that has evidence of mathematical concepts and thinking? 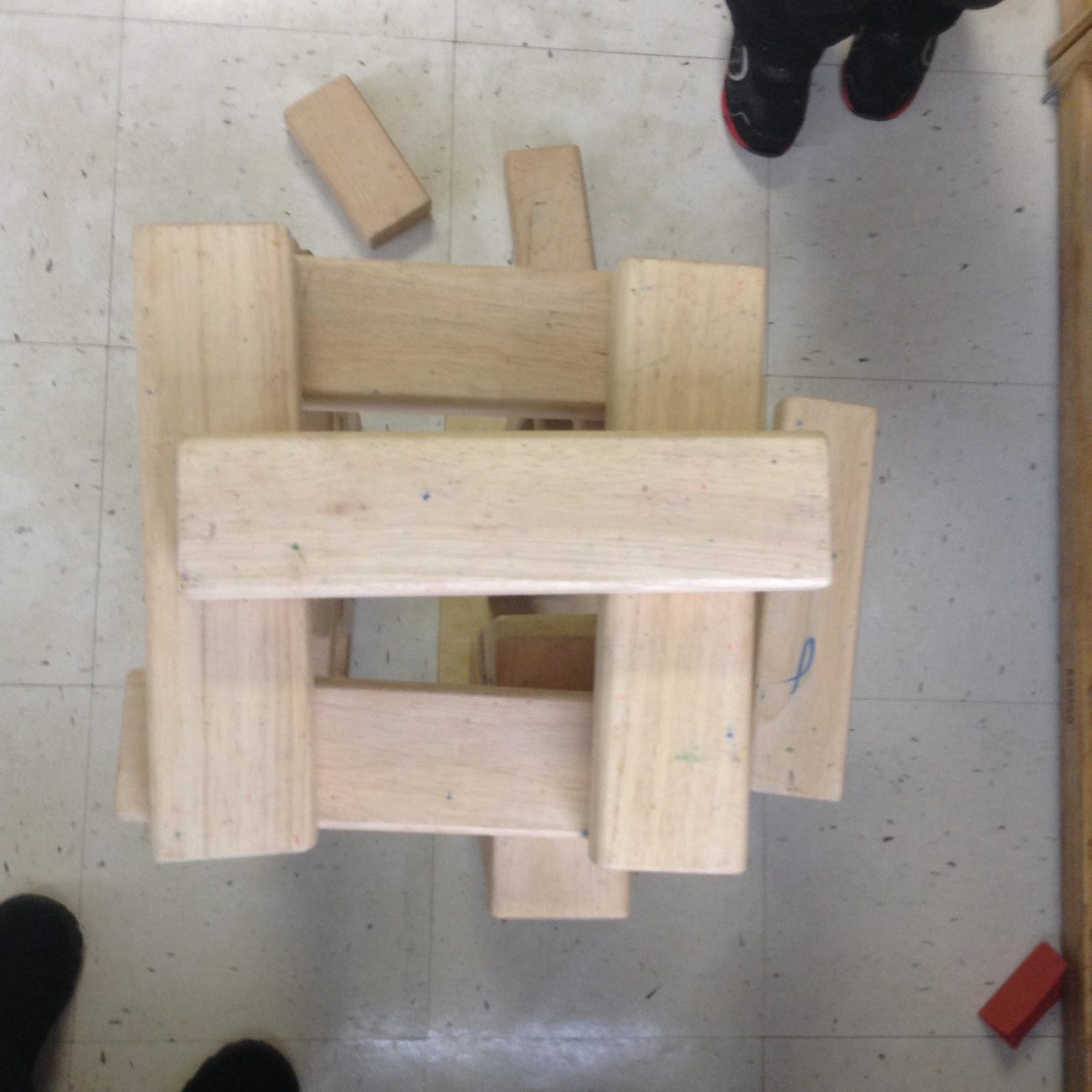 From this perspective, we see blocks arranged in horizontal and vertical lines, with a centered block on the top of this structure. We might not see significant evidence of mathematical thinking, however, when we change perspectives, what evidence do we see in the following photo? 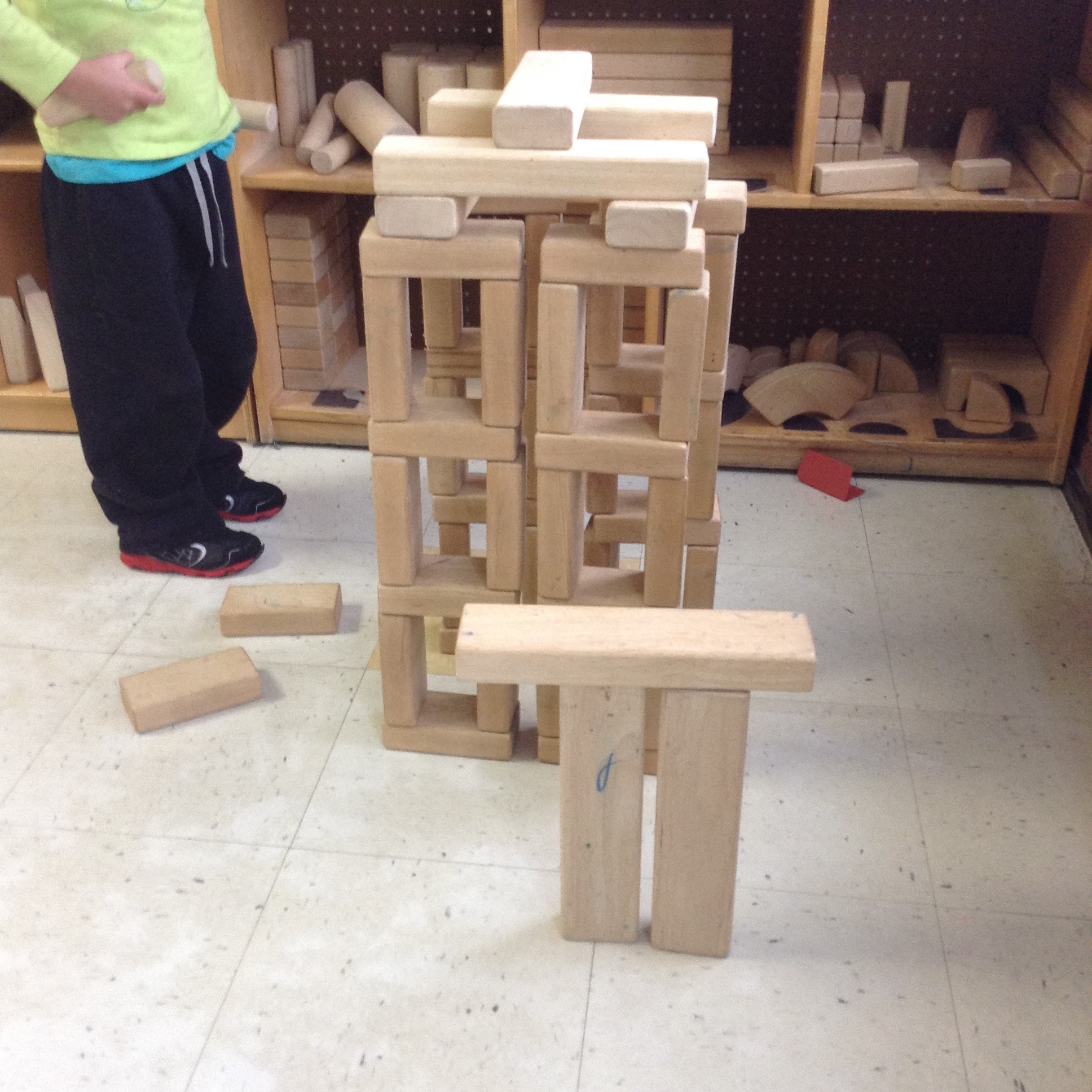 We also see opportunities to discuss and use spatial awareness language. Spatial awareness is mathematical as it provides language that compares two or more objects. The child mentally constructs a set of blocks in relation to each and then uses comparative language to describe the set of blocks. Patterns additionally require children to mentally put objects together in sets to describe how the objects exist in relation to each other. For example, in the repeating pattern construction, for the child to describe the vertical blocks as “on top of” the horizontal block, he would need to mentally put the horizontal and vertical blocks into a set, and then would describe how they are different from each other, and where they physically are in relation to each other. Spatial awareness language includes phrases like on top of, next to, beneath, underneath, above, below, to the right/left of, inside, outside, through, &c. These words and phrases can serve the purpose of linking two or more objects and making a comparison between these objects.

What evidence of spatial awareness is there in the following photo? 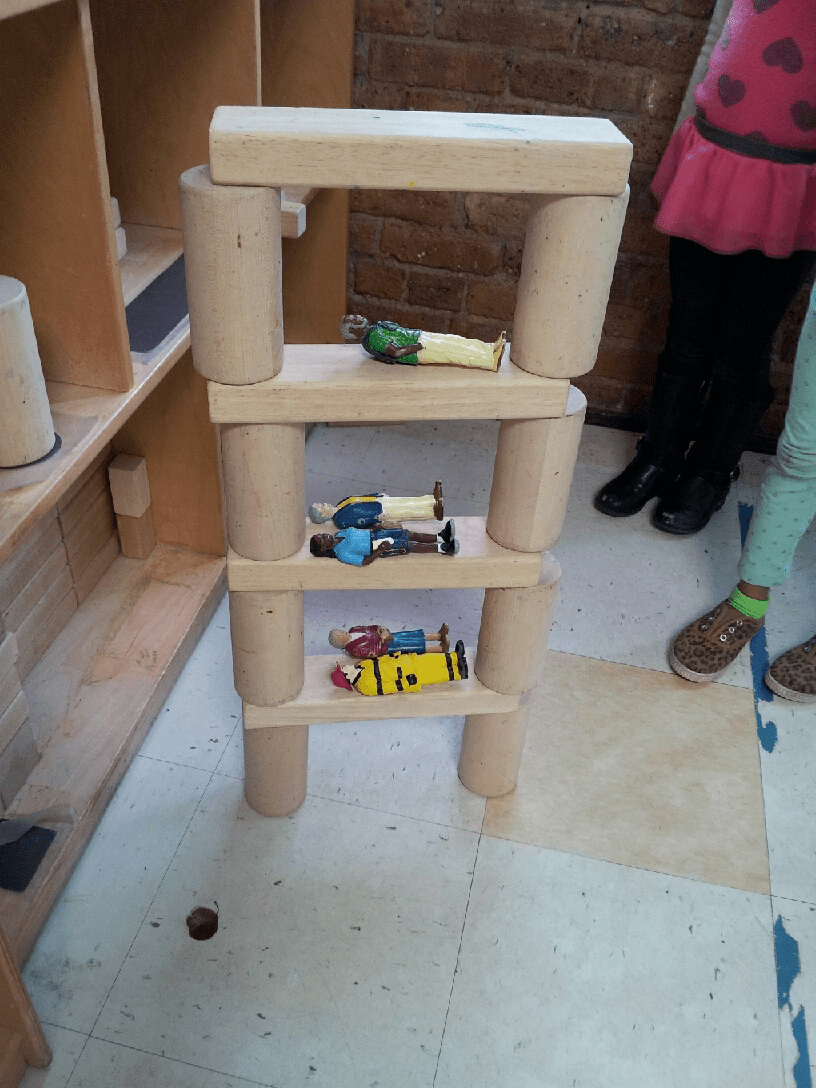 We can guess that this child has created a building, likely an apartment building, where people live. She has created this building using an AB repeating pattern – two cylinder blocks, long rectangular block on top, &c. This pattern repeats for four cycles. In this situation, a teacher would be able to discuss the repeating pattern, using spatial awareness language, such as, “I see that the rectangular block is on top of two cylinders.” She could also ask the child to describe the building using spatial awareness language, such as “How did you create this building?” or “What is below/above the rectangular blocks or cylinders?”

Let’s examine one more photo. What types of mathematical concepts exist in this building? Is there evidence of patterns? Is there evidence of spatial awareness? What types of questions could you ask of the child in order to focus on specific math concepts related to spatial awareness? What other math concepts can be seen and what questions related to these concepts could be asked? 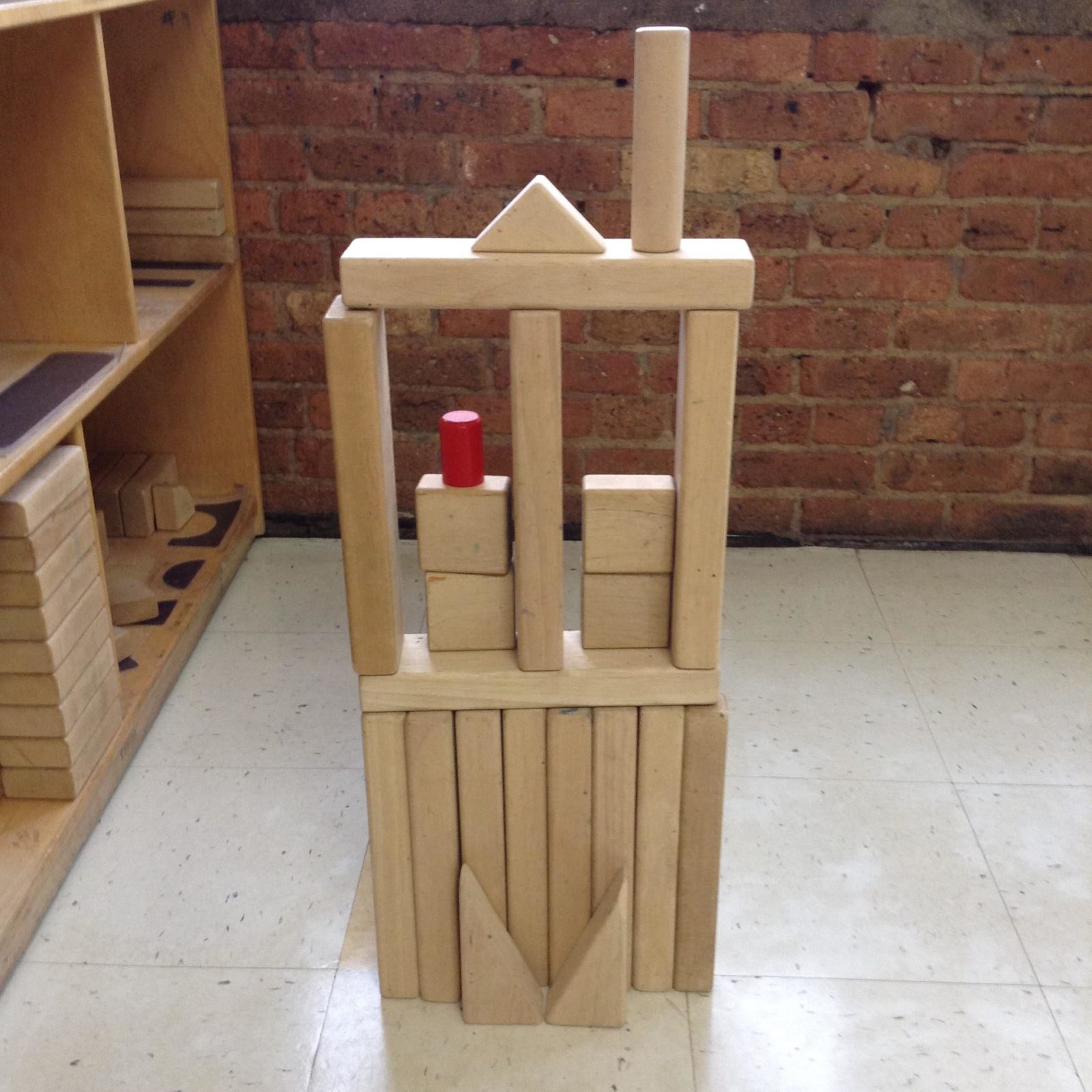 In this photo, we do see evidence of a part of a repeating pattern. On the second level of this building, we see long rectangular blocks, two square blocks, repeating for 2-½ cycles. This may be an unintentional aspect of the building process, but it can still be noted when discussing the building with the child. What is most striking to me is the symmetry in this building. The child has created a near mirror image structure, with two cylinders being the outliers in this symmetry. A teacher could discuss and ask questions based around this symmetry focusing on spatial awareness, the physical relationship of blocks in space to each other. In this case, a teacher may ask specific closed questions about where objects are, such as “Where are the two squares?” but could also use open-ended questions to gain explanations for why this child built this way, such as “Why did you create the building this way?”, hopefully leading to a discussion of symmetry.

We’ve seen how block building can elicit mathematical language around patterns and spatial awareness and how a teacher’s questions can be specific to these math concepts as well as deepen a child’s thinking on these concepts. In the next post, we will see how intentional building, with child-created building plans, can showcase mathematical concepts.