When preschool children build in the block area, they typically build with a purpose. They may set out to build something specifically. This may change in the process but there is typically a clear process that occurs. Often, these constructions are representational. They are building something that they have experienced. An educator that is knowledgeable in mathematical concepts can anticipate what a preschooler may be exploring when they set out to build something specific. For example, if a child wishes to build their house with blocks, we know that they will construct walls, add some dimension of height, width, and/or depth, and there may be a roof enclosing. The child may focus on their perspective looking at the exterior of their house or they may focus on their perspective inside their house. With these options in mind, a teacher in this preschool classroom can anticipate math concepts of spatial awareness and dimensions of height, width, depth, as well as specific numbers of blocks that may be needed to reach a specific height/width/depth, as well as what may be built on the exterior or interior of the house that may be math-related.

In the following photos, we will see preschoolers building in the block area based on plans that they created beforehand by sketching on paper with markers. 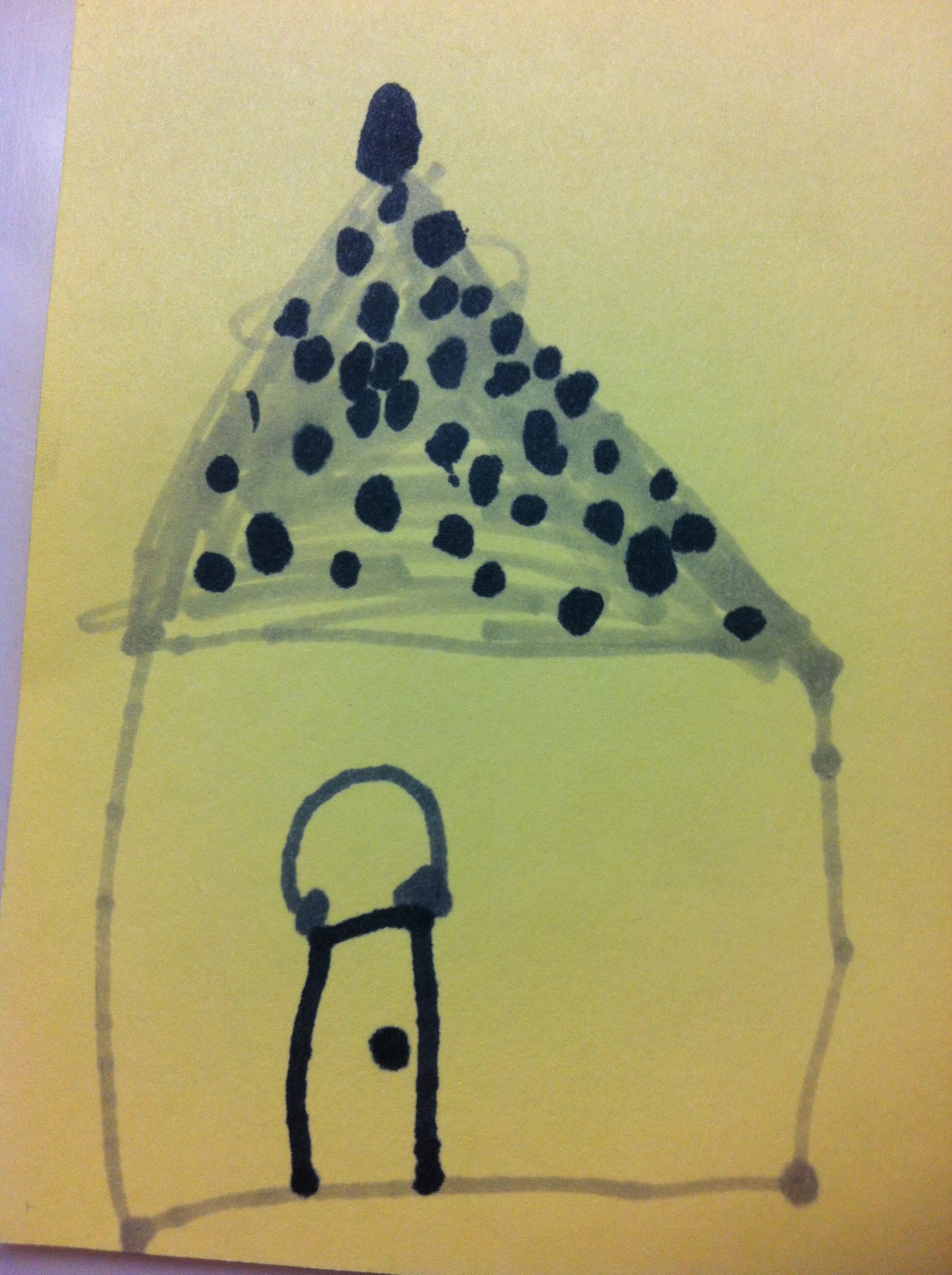 This child has drawn the exterior of their house. What math concepts do you think the child is exploring in this drawing? How will this child use their mathematical understanding when building their house with blocks based on this plan?

This child then built her house with blocks based on what she had drawn. 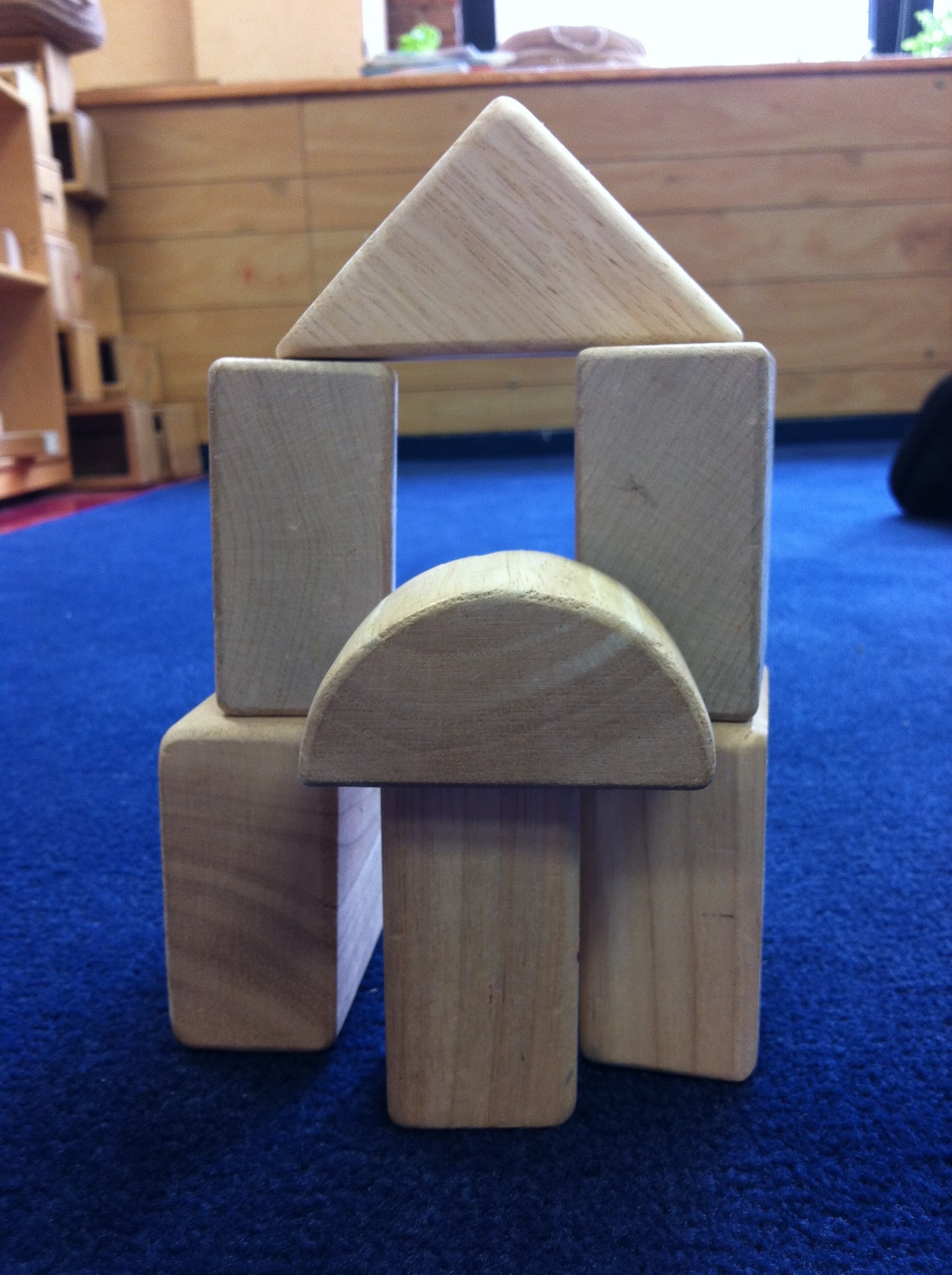 While appearing like a simple block construction, this child has demonstrated cognitive abilities to recreate her house using a different medium, blocks, then her original drawing. Using only 7 blocks, she has accurately built a house that retains the original qualities of her drawing, particularly the arched doorway. This type of building is different from open-ended building. The child has an image already of what the completed building should look like, or specific qualities that it has (the arch in this case), and has this knowledge prior to building. In this way, the child knew that the walls would need to be higher than the door, and chose to use 2 blocks stacked on each side to create the walls, with a triangle on top. In this process, we can see the child choosing specific shapes to match her original drawn plan.

Similarly, as part of a small group activity, preschoolers drew pictures with markers documenting how they get to school typically. Jorge drew the following picture showing the school on the right, a car, and his house. 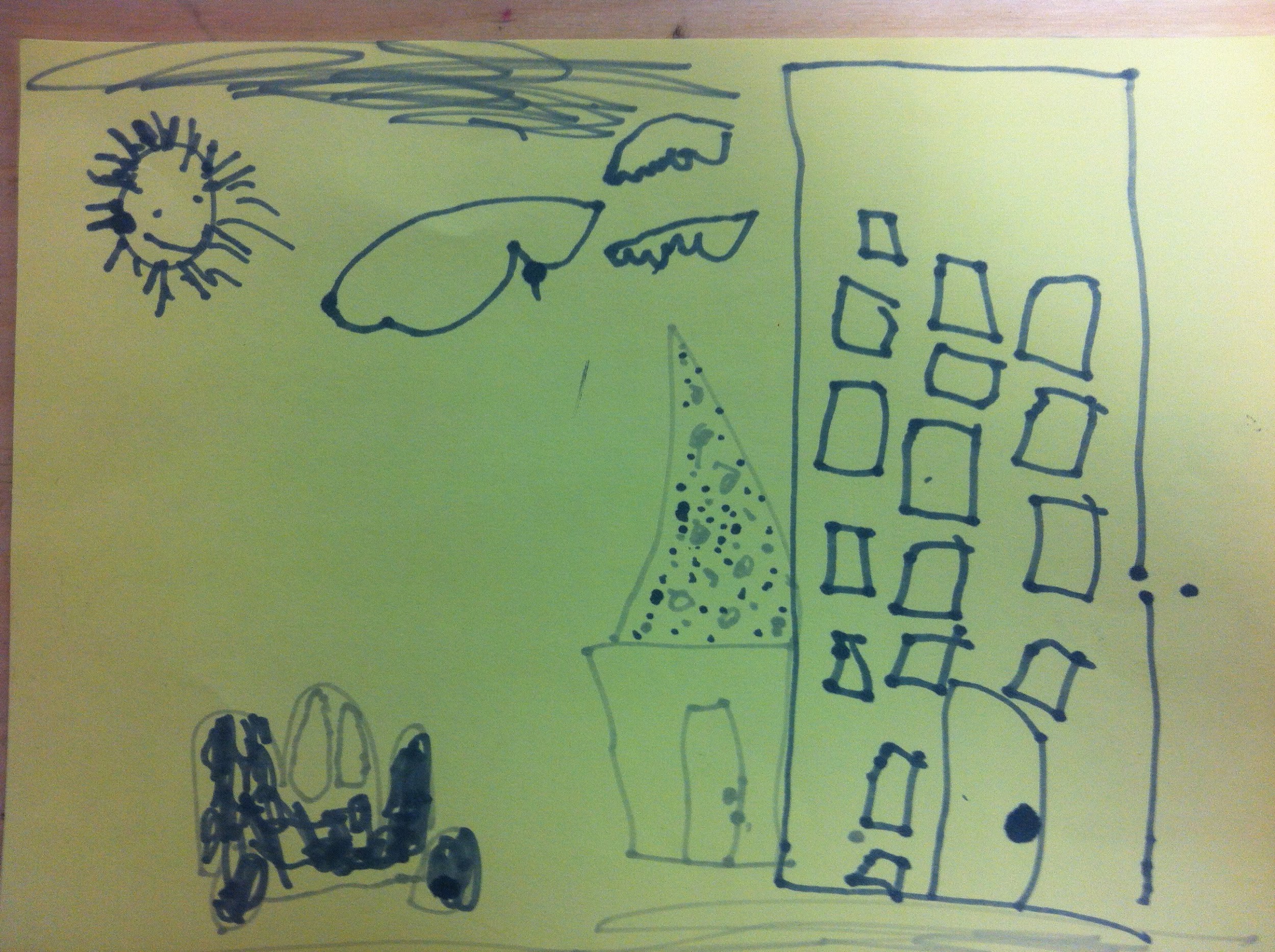 While all group members (Jorge, Maria, and Anna) drew a picture, this small group decided to use Jorge’s picture of the school as their plan. They used this plan to build the school using unit blocks. They began building, with discussion facilitated by a teacher who was focusing on mathematical concepts and using language reflecting these concepts. 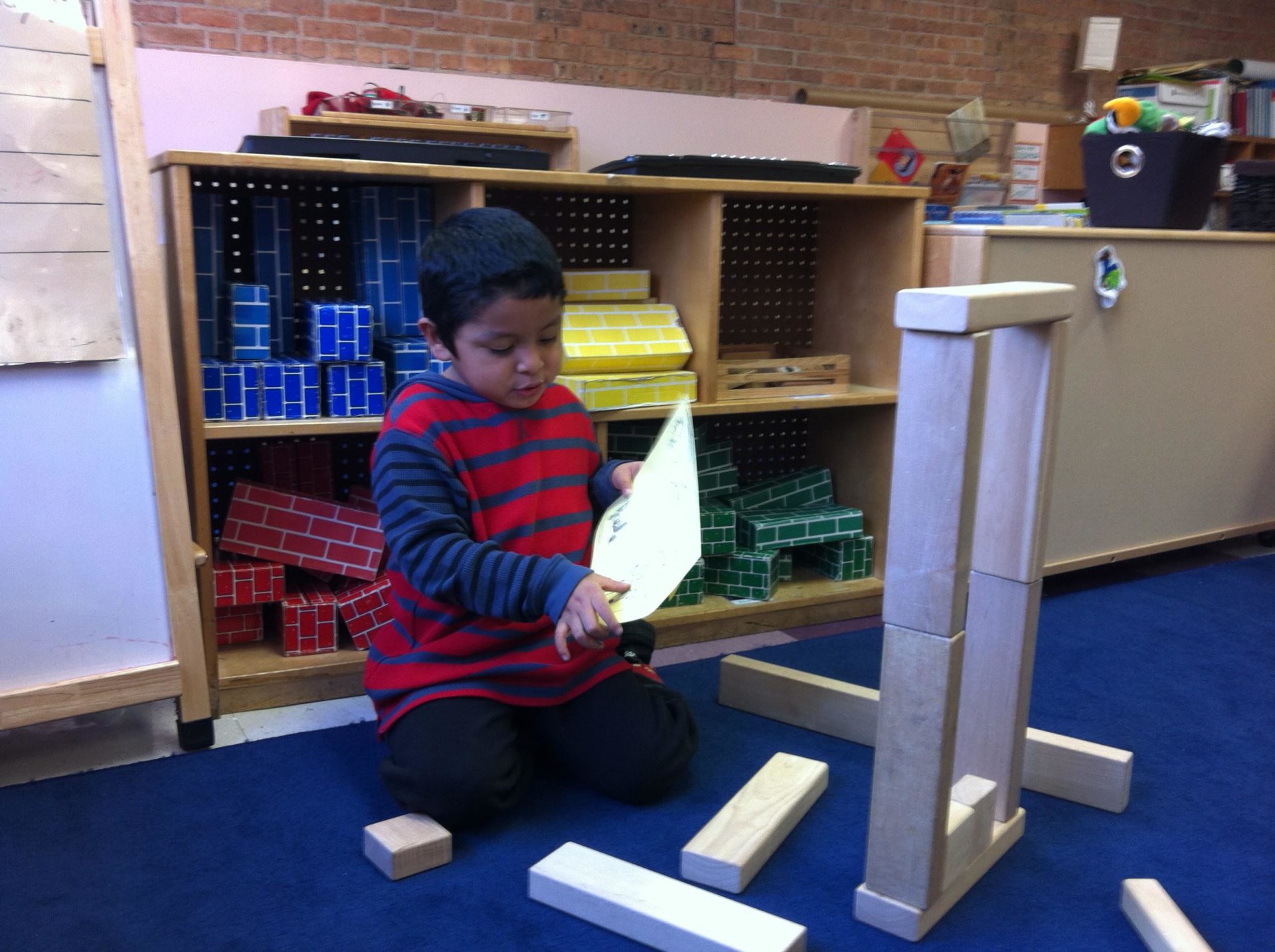 They began building, creating walls and placing two square blocks representing windows on the bottom of the structure. However, with teacher guidance, they reasoned that there was not enough room to fit 2 windows and a door on the first level. They decided that the walls were too high as well and that only one block should be used for the height of the first level.

The new design above represented the first two floors. They decided that their drawing may not be accurate and that windows should start on the second level. We can notice a repeating AB pattern starting to take shape with the overall building design. There is a horizontal block followed by two vertical blocks. The group decided to put three square blocks representing windows on the second level. The teacher asked them why three and they explained that only three would fit. At this point, the teacher gave some direction by asking, “How many windows do there need to be?” This closed question gave the group some focus on how they should proceed. Maria told the group there were 16 windows. The teacher asked how she knew, and she replied that she had guessed. The group then counted the windows and found out that despite guessing, Maria was correct! There were 16 windows in the original plan. Based on this, they counting building focused on creating a building with 16 windows. 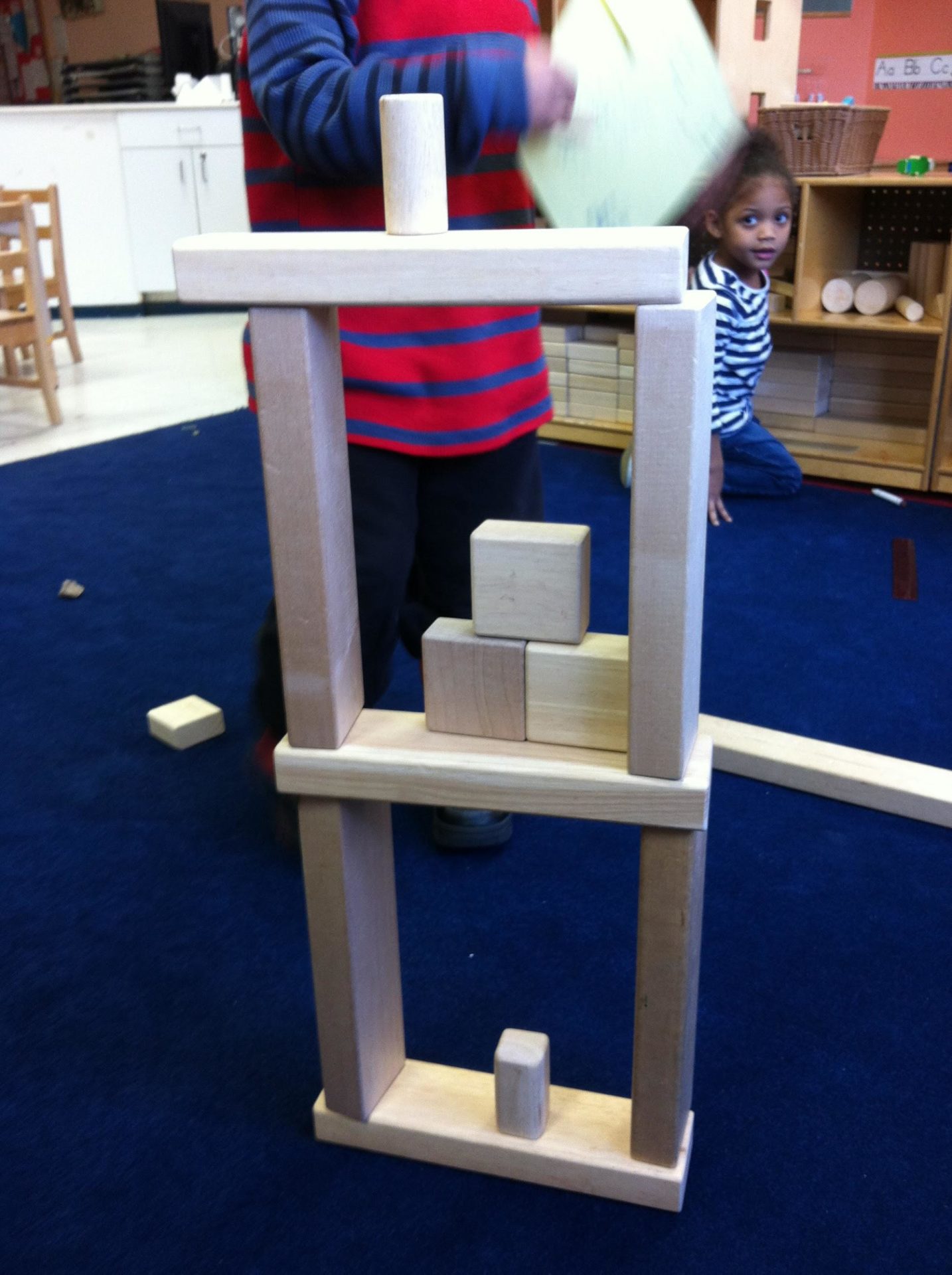 At this point, they had a problem to solve. They could no longer build higher as they could not reach any higher, yet following their rule of 3 windows per level, they still needed to add windows to get to 16 total windows. With teacher guidance, they re-evaluated how many windows could fit on each level and discovered that they could safely place 6 windows on a level. 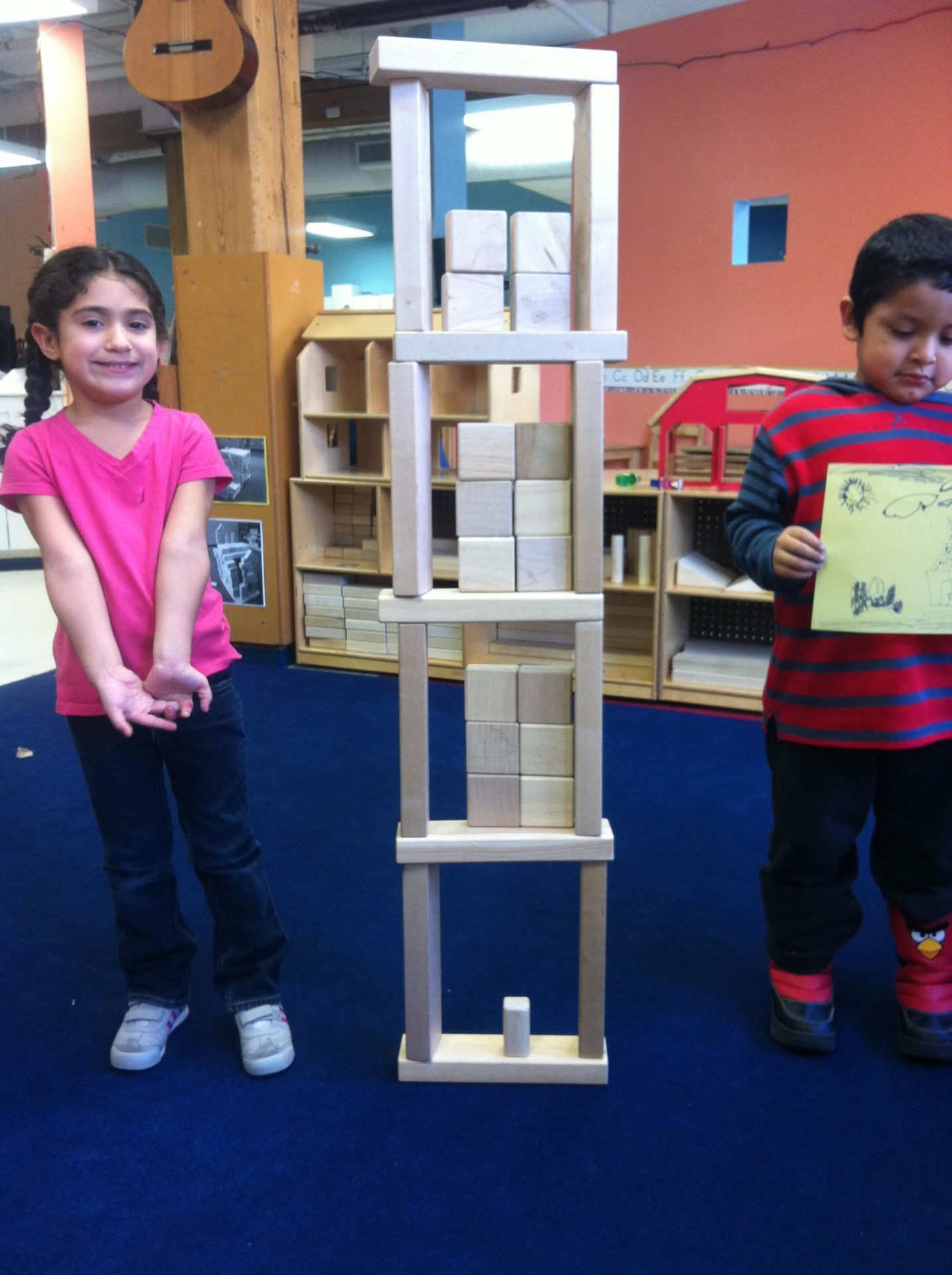 This is their finished school. They followed a pattern of six blocks per level and found out that they only needed 4 windows on the top level. In this activity, they explored many different mathematical concepts – number sense, spatial awareness, patterns, comparison & measurement, as well as cognitive reasoning and problem-solving. By planning this as a small group activity, their preschoolers were able to discuss issues amongst themselves and explain their ideas as they went along. While the teacher facilitated the overall activity, these children were able to think and explain themselves using mathematical language, demonstrating their understanding of math concepts.

Blocks are a marvelous tool to support mathematical thinking and a well-stocked unit block area should be a staple in every preschool classroom. Young children should also have access to blocks throughout their day and I would encourage block play to occur at home with young children as well.