I know that I write a lot about walking my pugs.  If you spent two hours everyday walking around the same two blocks at a snail’s pace, you too, would have a lot of observations about the world worth commenting on. 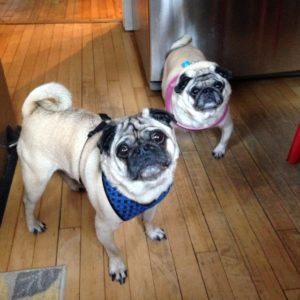 In the past couple of years, there have been several new babies born in my neighborhood.  Some young families have also moved in.  I now see these very young children everyday as they go to child care, play outside and go for their own walks around our blocks.  Inevitably, their moms or dads make comments as we pass exclaiming, “Look at the TWO doggies.  See, there are TWO doggies.  One is in pink and the other is in blue.”

In that simple interaction, so much is happening.  The parents are using everyday occurrences to teach concepts, and it comes so naturally they don’t even realize they are doing it.  By giving language to the observation, they provide the context for the number two, and then show them what two looks like.  Often, they point at one dog and then the other while saying, “one, two.”  They define the attributes of blue and pink by pointing them out, labeling them, and reinforcing color recognition.  Sometimes, they add a bit about one doggie is a boy and one doggie is a girl.

These are the kinds of interactions that take place between young children and parents (hopefully) on a regular basis.  When children spend most of their waking hours in child care, we need to be very sure that these same sorts of naturalistic conversations happen.  They cannot happen if the child care providers are talking to one another, or looking at their phones.  They don’t happen if adults don’t include children in conversations, take them for walks, interact with them, and play with them.

There is a big difference between setting up an activity and using that as a format for intentional teaching and what happens between a parent and a child on a walk around the block.  The interaction described above happens naturally, as a regular part of the day. Traditionally, that is how children learned in the early years.  At the feet of their parents, they engaged in the everyday activities of the household, and through interactions with their parents, they learned about the world around them. Ensuring the occurrence of those very organic conversations is as important as any other part of child care replicating home life. It is our job to make sure that they happen.