This month is all about money. 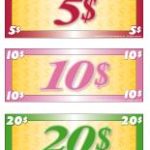 Money is a pretty interesting concept for young children.  It is one of those items that they see every day and they hear about all of the time, but they are not really allowed to have any or touch.  When Noah was about 4 he told us that he wanted to be the President of the United States.  “Aaaah,” we thought, “we must be doing something right if he has such ambitions.” Digging a little deeper, we discovered that it wasn’t the Presidency he was interested in, it was getting his face printed on money.  We actually had a birthday cake made for him that looked like a $100 bill and smack dab in the middle was his face.

Coins present problems for programs with children under three as they are a choking hazard.  Even the play sets available for purchase, usually have smallish items that need to be sorted out for a mixed-age room.  However, if you have children 3 and over, there are so many ways that money activities can support early math concepts.

At first, most children will believe that all money has the same value, that it is irrelevant if they have a nickel, a dime, or a quarter.  In their minds, they are all equally valuable and they may even count each coin and assign it a value of “1”.  “I have 5 monies,” is not an unusual thing to hear a 3 or 4-year-old say. It would be much, much easier to teach value if American coins increased in size as they increase in value.  Since they do not, it is very complicated to expect children to understand that 2 nickels=1 dime (the nickels are bigger and therefore “more” than the smaller dimes).  Remember, children are confused by appearance and our money system is really confusing. (If you have ever travelled to a place with a different monetary system, you will find that even as an adult, you will be confused by the size of the coins and their values.)

Start with pretend paper money – Monopoly-type money works just fine.  If you want it to last for more than 1 day, you might go and laminate a lot of it, so it doesn’t get crumpled up or written on.  I also like that Monopoly money is color coded and the values are written clearly on it.  If you create your own, make only 1s, 5s, and 10s to start so there is less confusion. Use it around the classroom, having children pay for different things and possible even earn pretend money.  If you choose to do this, be sure that it is equally distributed and earning money is not connected to behavior.  You can distribute $20 in small denominations to each child upon entering your program one morning and then you can have different areas where children can spend throughout the day.  If they worry that they are going to run out, simply reassure them that they can get more if they want it.  Although this is not the life lesson we will eventually teach children about money, in a play and pretend situation, it will remove any anxiety the kids might have about not having enough, or running out.  Even when removing the worry, some children will hang on tight to their money anyway.  That is OK.  They can participate but not pay.

The goal of the activity is for children to make the connection between something that costs $1.00 and the $1.00 bill in their hands.  Later, they can use their $5.00 bill and begin to understand that they should get change.  Again, this is a very sophisticated skill.  Kindergarteners and 1st graders are just beginning to make these connections.