As soon as they hear a tune, children will get up and move their little bodies to a rhythm. As an early childhood educator, I love to incorporate music and movement into my lesson planning each week because children LOVE it and it is a powerful learning tool. Children enjoy learning through music and can easily grasp concepts through music. For example, many young children have heard the “ABC’s” song since they were born. Through listening and singing they learned to recite the alphabet, which is a beginning literacy skill. Later, children will be able to connect the names of the letters to their symbols and sounds. Many children’s songs have movement directions for children to follow. This encourages following directions and even basic mathematical concepts such as spatial awareness and concepts such as over and under or big and small. Using movement in songs to incorporate math in your classroom is an alternative way to teach basic math concepts such as counting, patterning and number sense.

In the early childhood classroom, a teacher can use a popular directional song such as Going on a Bear Hunt and modify the movements to teaching math concepts. The lyrics can be composed by the children using the premise of going on a hunt (lion hunt, princess hunt snowman hunt etc.) to find a treasure or make it to a destination. Integrating the developmental areas of movement and math will give the teacher a perspective on the child’s ability in these areas as well. 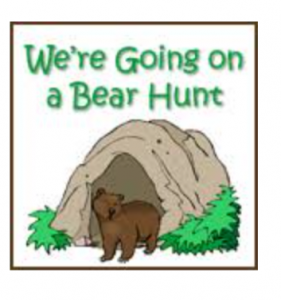 A board game can be created with large poster boards taped together to create a walking path. Create lines for spaces  on the boards so the children can move to and from them during the game. For this game, a large life size die would be the most fun and creative for the children. 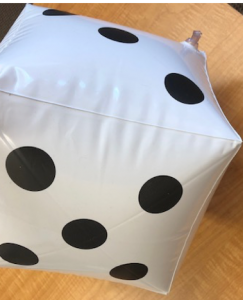 To introduce the game, teachers can play the bear hunt song before the game to get the children excited about the activity they are going to engage in. Then during the game, the children can roll the die and pick a directional card that says (for example), “move 3 spaces to grab your backpack for the bear hunt”. These directional cards can incorporate the theme of the song, having the child collect the items they need in order to be prepared for the hunt. After the game has been played, the teacher can play the song again to recreate connections for the children.

This game can be played as a cooperative game with young children to collectively make it to the finish line with all of the items needed for the bear hunt or as a competitive game. The children can change the rules of the game each time they play. For example, “the player that collects the backpack can automatically proceed to the finish line”, might be a rule that the children come up with.  Thus, getting the backpack makes you get to the finish line first! This technique can assist with keeping children engaged once they have mastered one set of rules. Later children can add new directional cards to the game, for example “Move 2 spaces then do 5 jumping jacks”. This can challenge children at different cognitive levels. Interactive games can increase engagement, which will give children a chance to learn new information or recall previously learned knowledge. Adding this to a classroom can be fun and engaging while promoting team building and math skills.

5 Replies to “Music and Movement = Fun”