Last week I wrote about traditional Nesting Dolls as a great math manipulative, so today I thought we could explore Nesting Blocks as an extension that post. Nesting blocks provide all of the good fun of sequencing as the dolls do, but they have the added benefit of being square with flat sides.  This means that in addition to nesting them, children can build with them.

Regardless of the math potential, the fun of piling up the nesting blocks into tall towers and knocking them over is too good to pass up.

Many hours were spent building them up and knocking them down.  In order to make the tallest tower, children have to put them in order from largest to smallest, so there is a payoff in getting it right and trying many times.  I tried to find a picture of the boys playing with these, as I am sure I have seen one somewhere, but my pictures are too disorganized to put my hands on them now.  I did, however, find this picture with this beautiful set of wooden nesting blocks.  See how they have clues on the sides. 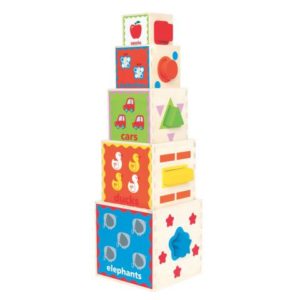 One Reply to “Nesting Blocks”