I came across this picture the other day on my phone.  I must have taken it while observing one of my students out in the field.  I remember that it struck me how engaged this toddler was with this small, tabletop set of dominoes. 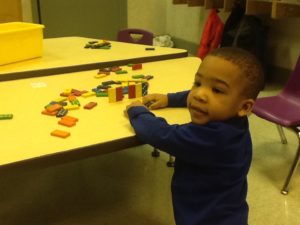 It got me thinking about Developmentally Appropriate Practice and how we need to trust that the teachers who work with children daily, know what is appropriate for the children in their group.  I would not necessarily say that this set of dominoes is designed for toddlers.  Indeed, the box says “Ages 8+” but we all know that that designation is meant for playing Official Dominoes, not playing with dominoes as a manipulative.

So what does the toddler get out of manipulating this manipulative?  The obvious answer is that he is using his motor skills to stand each domino up to balance them on one end.  Less obvious is that he needs to use his spatial knowledge to place each of the dominoes out so if they were to fall, they would not knock the others down.  He may also be using his spatial skills to try and get them close enough to each other so when one falls over it does knock the others down. From the picture, it looks like he is trying to line them up in an even row.   In any of the above ways, he is thinking about spatial relations – which is early math.

I am also quite sure that this child does not have rote counting skills yet, nor one-to-one correspondence, but by playing with the dominoes he is exposed to the grouped pips (dots) in number formations that he will see throughout his life.

Just because dominoes may not be designed for toddlers and may even be considered to be Developmentally Inappropriate, after observing this child engaging with this set, I believe that the teacher made a great choice when she put them out.

One Reply to “One More Word About Dominoes (I Promise!)”