“Can we play with those counting things today?”

Two bubbly three-year-olds are standing in front of me with expectant smiles on their faces. I have absolutely no idea what they talking about—or what’s going on in those busy little brains, which I can almost hear whirring with activity.

“What counting things are you looking for?” I ask.

“Those pieces of wood with the holes,” responds Hissham.  “But they aren’t holes, really. They’re like circles….”  He trails off, hoping that I’ll know what he means.

“And we want the buttons!” Mariana chimes in. 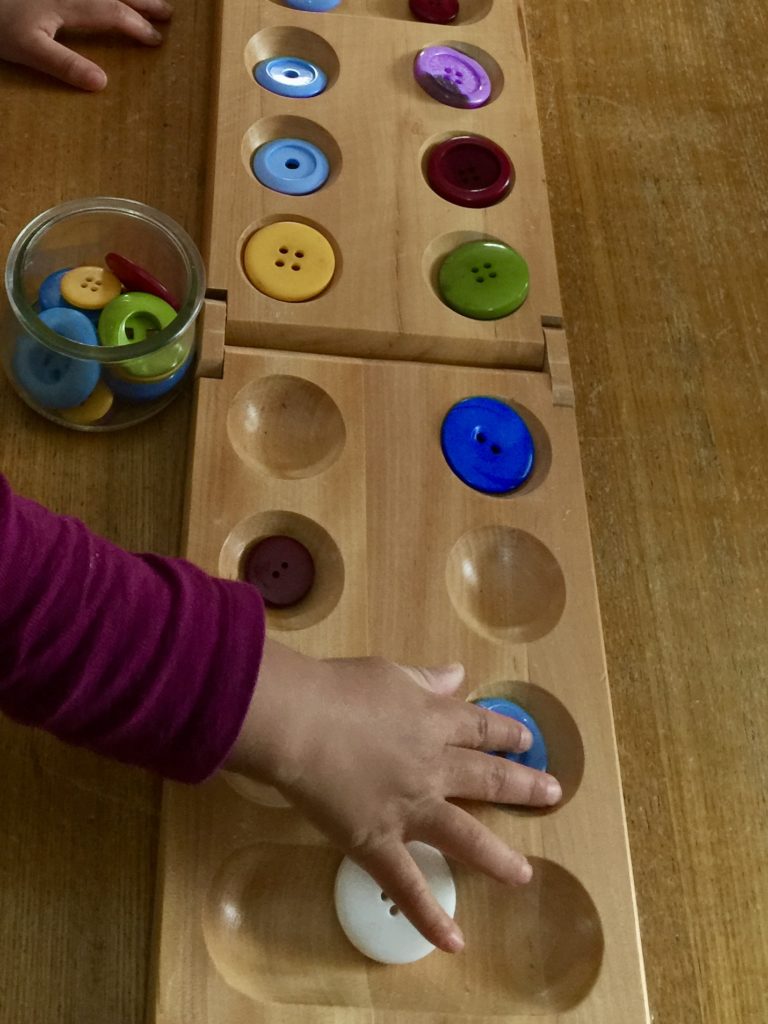 Ah, they want the mancala boards!

We are quite intentional about setting up math environments that don’t scream MATH CENTER.

We start with authentic materials like the mancala boards—materials that encourage sensory play and exploration. Then we sneak in other materials that lead the children into deeper math investigations.

We don’t focus much on rote counting and number recognition. Instead, we foster the development of the children’s number sense because we want the children to move on from rote number identification to a more holistic understanding of number quantity.

Children learn math at their own pace by using many different skill sets that don’t always develop at the same pace or in the same order. So we give them lots of options to let them learn in their own unique ways. By keeping it playful and hands-on, we set them up for math success. 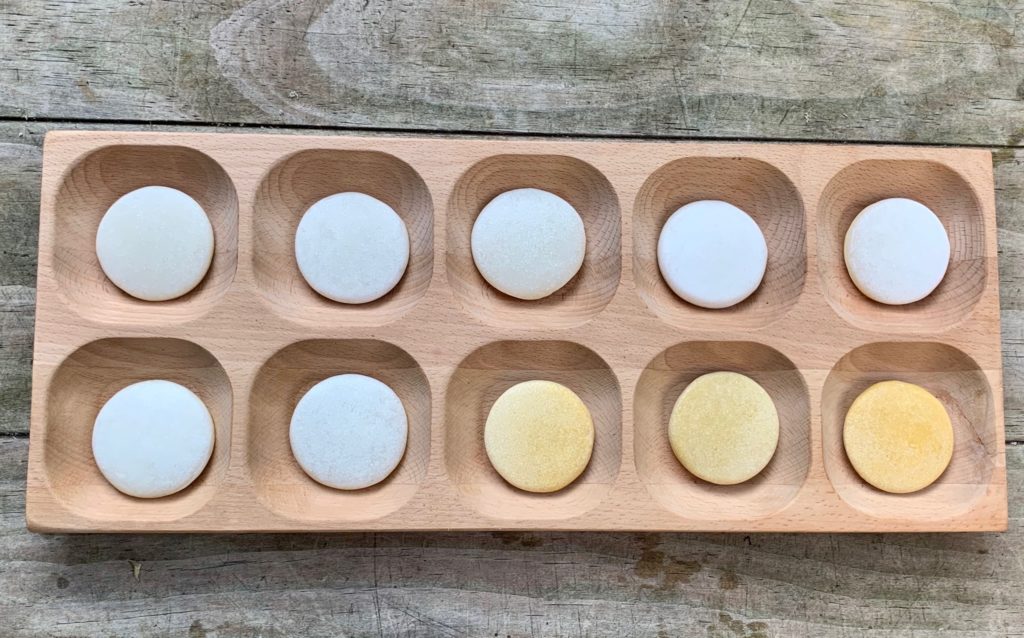 The new math that is being taught in schools uses ten frames a lot. So what is a ten frame?

A ten frame is a rectangle with 10 equal spaces. It has five spaces on the top and five on the bottom. You can use counters or math manipulatives to represent numbers less than or equal to 10 on the frame. Ten frames are available to download and print from various websites—or you can use a ten frame like the one pictured above.

Ten frames help kids develop number sense. For our youngest learners, we often provide five frames, which are arranged in a 1-by-5 design. Research suggests that five frames are a good place to start for very young children.

By working with numbers in ten frames, children can see the number of manipulatives that a number represents. Ten frames set the stage for work with larger numbers. I love ten frames because children can use them in ways that reflect their unique developmental level. Ten frames also enable children to play with patterns and group objects together. It may look like play, but ten frames help build a basic understanding of early math—and lay the foundation for later math learning.

I love wooden ten frames like the one in the photo above, but they are pricey. I have been searching for (and finding!) mancala boards at thrift shops and yard sales for years. We now have a collection of second-hand ten frames that we use for playful math. 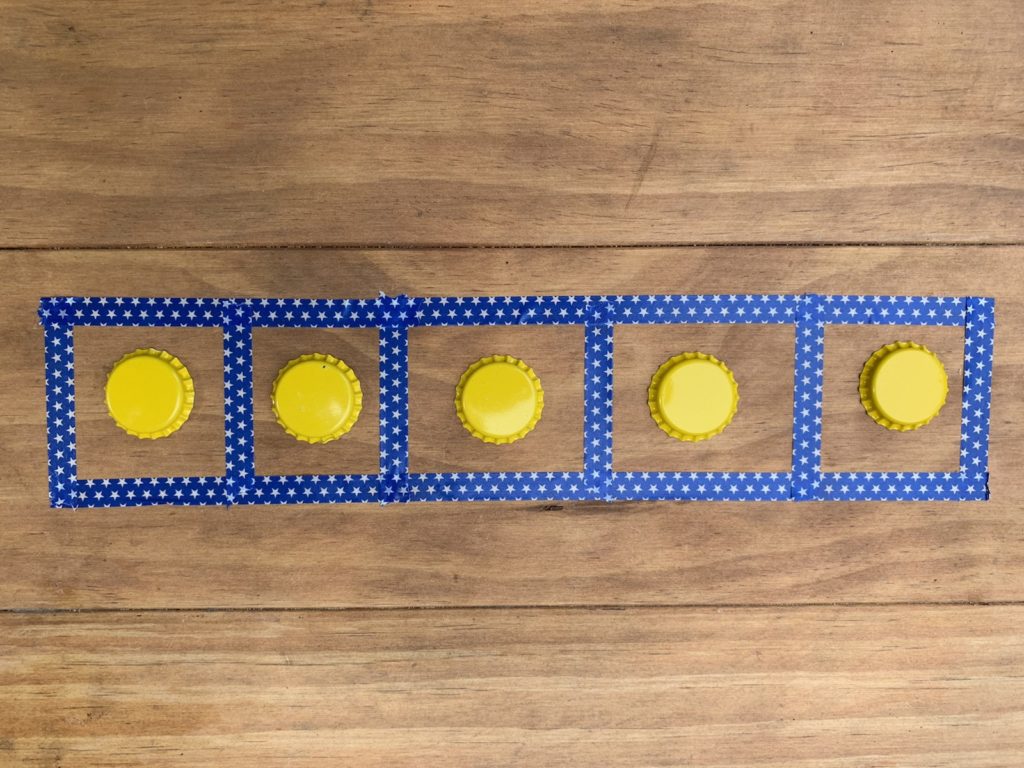 You can buy a ten frame or download ten-frame printables from various early childhood websites, but there are endless ways to create your own ten frames. We’ve used egg cartons, ice cube trays, tape on a table (above) and chalk on the sidewalk. 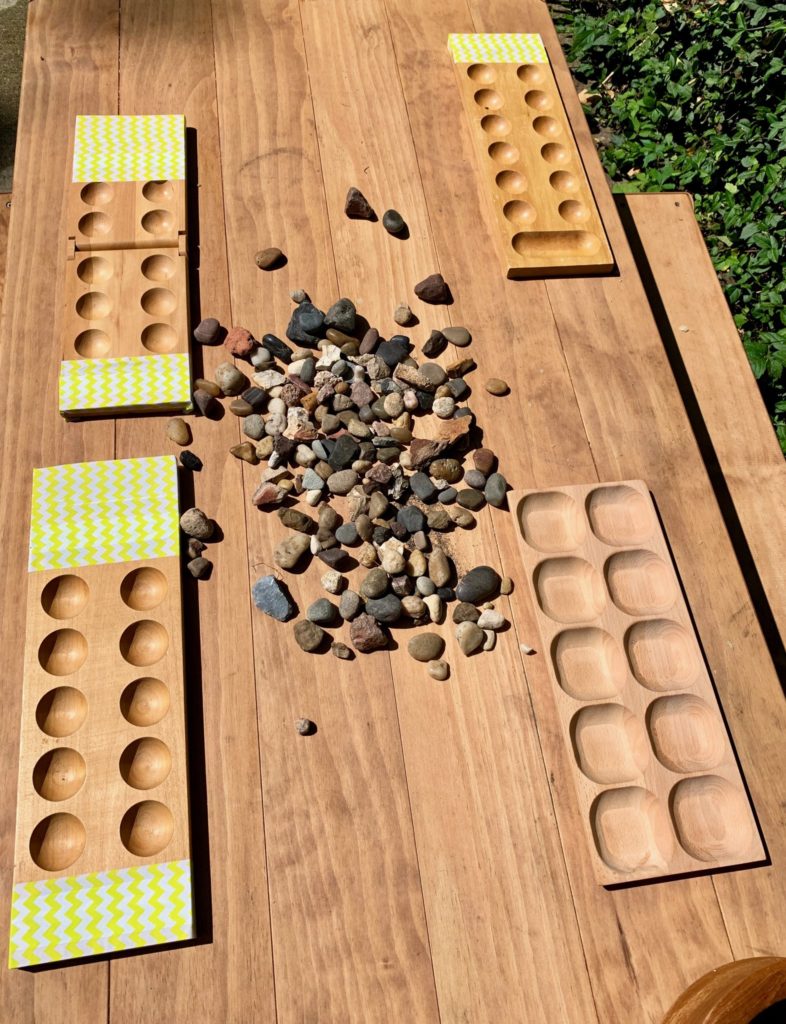 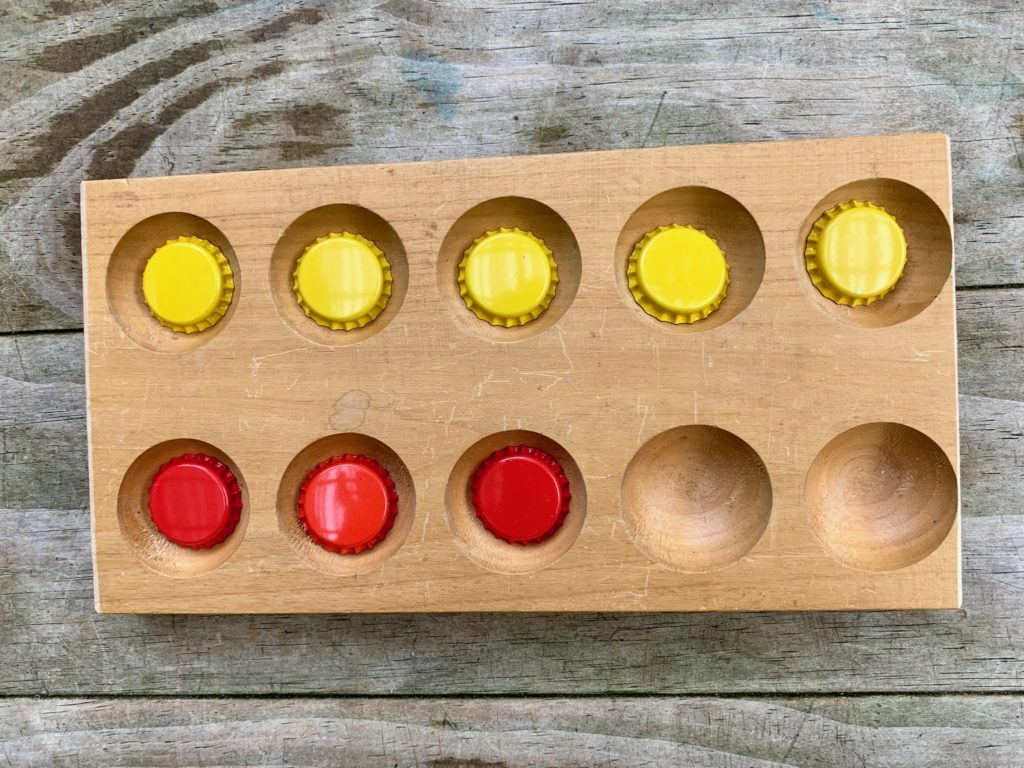 Then I realized that five frames would be even better for the two-year-olds in my program. With a five frame, younger students can use smaller set sizes that are within their developmental counting range.

Young children are always collecting something. By incorporating a five frame into their collecting activities, we help them develop a rudimentary understanding of number sense.

Pete the Cat and his oh-so-groovy buttons have been at the top of our reading and music rotation list lately, so adding button manipulatives seemed like a logical next step.

But beware: Any small manipulative is a choking hazard, so please choose your manipulatives carefully!

By now, I was a bit “saw happy,” so I also created a three-frame to use with subitizing and a two-frame, as well as a one frame for one-to-one correlation. Remember, we want these activities to be developmentally appropriate for the youngest children in our programs.

Remember, our goal is not to work on counting, but to set the stage for later learning with these early math tools. 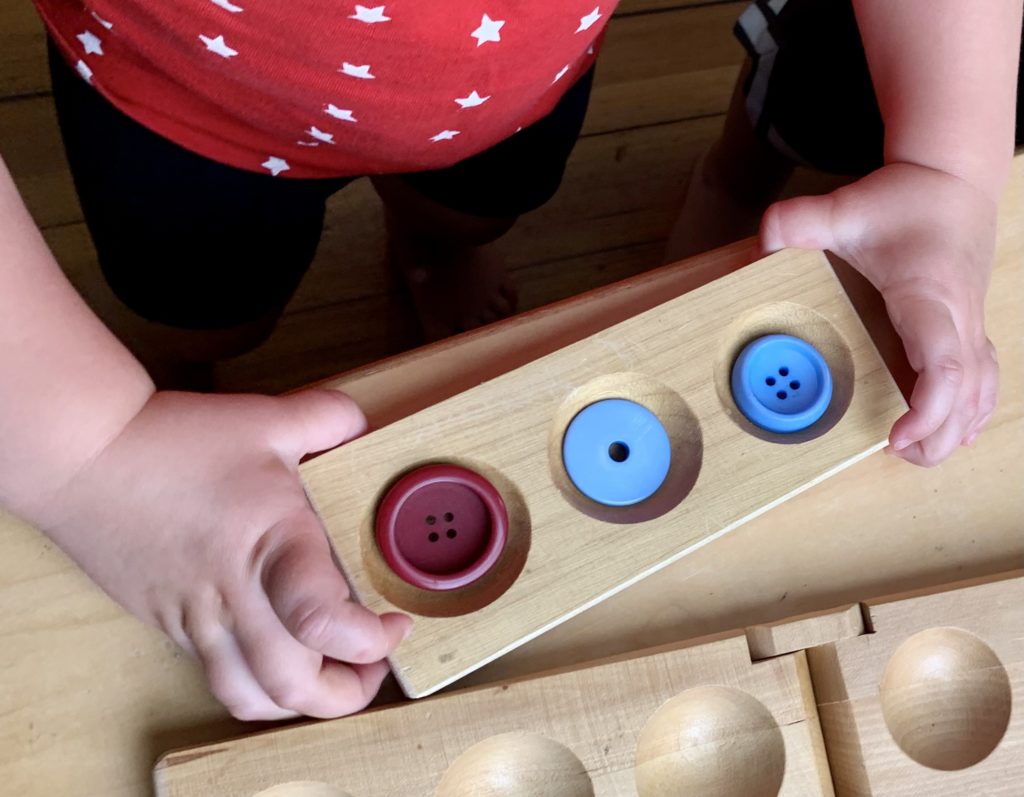 Older preschoolers can move up to the ten frames when they are ready. I generally suggest that they start in the top left corner and fill the entire top row before moving on to the second row (just like reading).

Of course, this is way beyond the developmental level of our youngest learners. All that we want to see with these children is the ability to place one button in one circle. As their brains continue to develop and their understanding of early math concepts grows, they can graduate to ten frames.

While the children are playing with their frames, you can help foster the development of counting skills by putting a counter in each square of the frame and saying: “One, Two, Three, Four, Five—you have five buttons.”

Then tell the children to count the buttons. After they have counted to five, ask: “How many buttons are there altogether?”

If they answer five without recounting, they may be exhibiting an understanding of cardinality (the knowledge that the last word in a counting sequence represents the total number of objects in a set).

Cardinality is a school standard for kindergartners, but your early learners will just think of it as a fun game to play with buttons!

You can easily adapt these Early Math Counts lesson plans for use with ten frames in your classroom:

Don’t forget to click on the CONNECT WITH FAMILIES button on the left side of each lesson page to download and customize a Family Letter to send home with your students after each lesson. 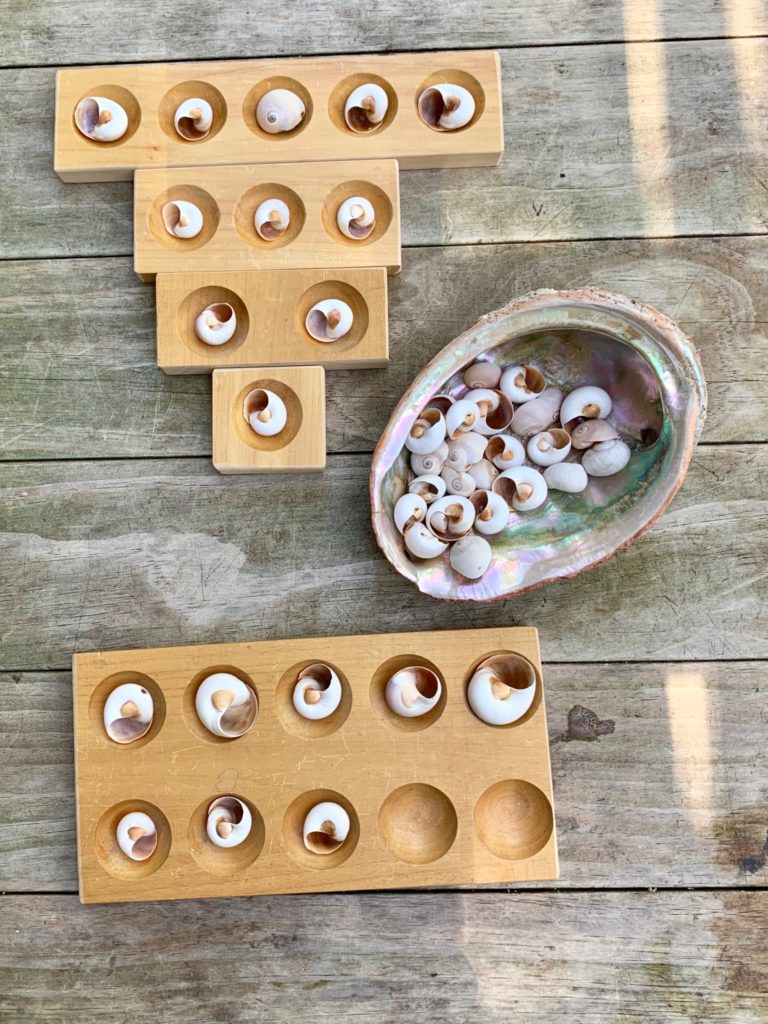