This one isn’t for children, it’s for you. This is a classic probability question that has puzzled game show contestants for years.

Remember the game show “Let’s Make a Deal”?  It is back on TV, new host, same idea. People dress up in costumes and hope to get called down to the stage to “Make a Deal”.  One of the games you might remember is the 3 Door Problem.

The host now asks the contestant if s/he wants to switch doors.  Do you think s/he should?  Will it increase the chances of winning if the contestant switches?

Most people think that the chances are winning are even, since there are now two doors and it seems that there is a 50/50 chance of choosing the correct door.  They would be wrong.

Let’s go back to the beginning.  When the contestant first chose his chances were 1/3 or 1 out of 3 chances that the choice is correct.  That also means that there was a 2/3 chance that the choice was incorrect.

When the host removes one of the doors as a choice, there remain two doors. However, if the contestant keeps his/her choice the chances of winning are still 1/3 (it hasn’t changed at all).

If the contestant guessed correctly to begin with and changes his/her choice then s/he has 0 chance of winning.

However, if the contestant guessed incorrectly the first time, changing his/her answer increases the probability of winning to 2/3.

If you don’t believe me, set up the game with cups and a ball and keep track of the odds.  If you play enough, you will begin to see that this is in fact, true.  Amazing, yet true! 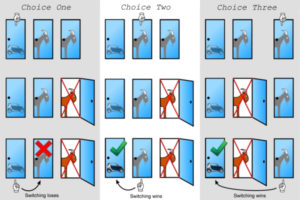