I was recently at the Chicago Children’s Museum when I discovered this large shelf in the middle of the hallway filled with enormous dominoes.  I stopped and took some pictures of them so I could write about them here (I am always thinking ahead:) 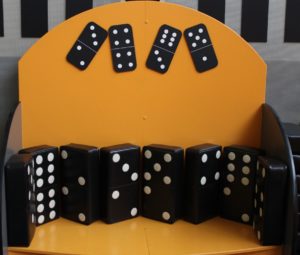 Dominoes are such a great math manipulative and a wonderful classroom tool.  I wrote about them last week so I won’t revisit those same themes, but I did want to explore the difference between a table top manipulative and one that can be played on the ground.

A traditional set of dominoes has 28 tiles and offers several options for children in terms of matching, adding, counting, sorting, etc.  For children who like to sit at a table and play, these are perfect.

But what about those children who prefer BIG play?  The children who choose the large rug and the big blocks over just about everything else?  How do we get them interested in the math concepts that a traditional set of dominoes offers?

Rather than insisting that these children come to the table and engage in an activity that is neither interesting to them nor appropriate for their need to play “big”, I say, “Bring the play to them.”  Access to materials such as the BIG dominoes above affords children another way to engage with materials they might not otherwise have interest in. All of the traditional domino math concepts can be explored with this large set with the additional dimension of size so they can be built up, knocked over, used in addition to the big blocks, and thrown around a bit.  (I don’t know if you can tell from the photo, but they are soft and made from foam rubber).

I also like the idea of adding these to a toddler area.  These are lightweight, a two-year old could carry one, and safer than large blocks.  This set is available on-line, but they are not nearly as large as the ones at the museum. 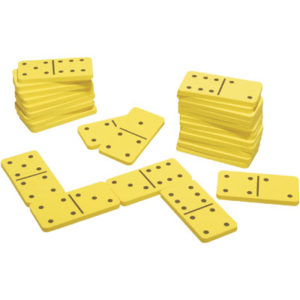 Providing more opportunities for children to engage in exploration in ways that are interesting to them through active play is one of the goals of an early childhood program.  Investing in a variety of materials for diverse learning styles and learners is worth the cost.  Think of it as an investment in your program that will come back to you in the success of the children and families you serve.

Does anyone know where you can get a set of the huge dominoes described above?