The 3 Pigs and the 3 Bears (as in Goldilocks and the…) are two favorite children’s classics that can also be compared and contrasted with your children.  This exercise is very different from comparing and contrasting versions of the same story, since many of the similarities and differences may not be as readily apparent to young children.

Even very young children will recognize that there are 3 animals in each story – same. They will also notice that both tales have a wolf – same.   From there, the similarities get murkier while the differences become more obvious.  The 3 Pigs are brothers but the 3 Bears are a Mommy, Daddy, and Child bear – different.  There is a little girl in the bear story named Goldilocks but there are no people in the pig story – different. The Wolf is a bad guy in both stories – same, but he experiences very different fates (depending on the version you are telling!)

Even within each of these stories there are opportunities to compare and contrast.  As Goldilocks encounters different areas of the Bear’s house she notices that all of the items are the same (beds, chairs, porridge) but they are also different (firmness, size, temperature).  The Pigs all build houses but the houses are very different. 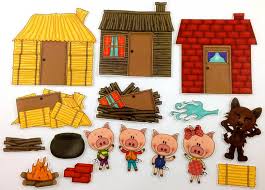 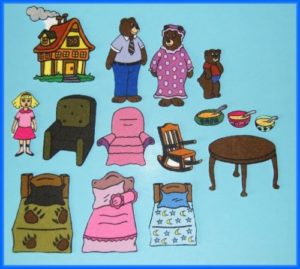 Once you have explored both stories with the children, leave the felt board and associated pieces out for the children to explore on their own.  It is through access to the materials that they can practice telling and retelling the stories to their hearts’ content.