Traditionally, mathematics education has not been considered developmentally appropriate for young children (Battista, 1999). Math is abstract while young children are deemed to be concrete thinkers, and some cognitive developmental work done in the mid-twentieth century has been used to suggest that young children’s mathematical ideas develop on their own timetable, independent of environmental factors like teaching (Piaget, 1969). Over the past two decades, however, a growing body of literature has indicated that many mathematical competencies, such as sensitivity to set, size, pattern, and quantity are present very early in life (National Research Council [NRC], 2009). 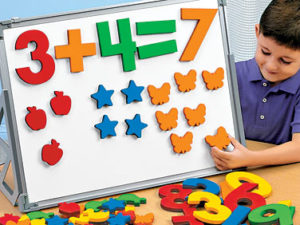 Young children have more mathematical knowledge, such as an understanding of number and spatial sense, than was previously believed. For example, research suggests that young children have a basic understanding of one-to-one correspondence even before they can count verbally (e.g., pointing to items in a collection and labeling each with a number) (Mix, 2001). Further, young children also enjoy exploring spatial positions and attributes of geometric shapes by building towers with blocks and cubes and by manipulating various materials, such as puzzles and two- and three-dimensional shapes (Clements, 1999; Clements & Sarama, 2008). They also demonstrate emerging awareness of measurement, when they begin to notice and verbalize similarities and differences in the size, height, weight and length of various objects and materials (Clements & Sarama, 2008). In addition, research also suggests that 3 and 4 years-old children engage in analytical thinking as they collect and sort materials by various attributes (e.g., color, size, and shape) and in algebraic thinking as they copy the patterns they observe in their surroundings and create their own patterns by using pattern blocks and other materials (Epstein, 2003; 2006). In fact, as research points out, most children enter school with a wealth of knowledge in early mathematics and cognitive skills that provide a strong foundation for mathematical learning (Clements & Sarama, 2009; Ginsburg, Lee, & Boyd, 2008; Mix, 2001).

There is also new evidence that achievement in early mathematics has a profound impact on later success. For example, Duncan and Magnuson (2009) examined the mathematics achievement of children who consistently exhibited persistent problems in understanding mathematics in elementary school and analyzed it in comparison to children who had stronger early math abilities. The results of the study revealed that 13% of the children with persistent problems are less likely to graduate from high school and 29% of them are less likely to attend college than those who had stronger early mathematics abilities. In other words, the initial differences in mathematics skills in early years may lead children to remain behind their more knowledgeable peers not only in primary grades but throughout their formal schooling (Geary, Hoard, & Hamson, 1999).

Studies also showed the predictive power of early math skills compared to other academic skills, such as reading. Lerkkanen, Rasku-Puttonen, Aunola and Nurmi (2005) investigated the relationship between mathematical performance and reading comprehension among 114 seven-year-old Finnish-speaking children during the first and second years of primary school. The results suggested that the level of mathematical knowledge children have before schooling is very important because these skills are predictive of their subsequent reading comprehension. In other words, early mathematics skills predict not only later achievement in mathematics but also later reading achievement. Similarly, Duncan and colleagues (2007) conducted a meta-analysis of 6 large-scale longitudinal data sets to examine the relationship between early learning and later school achievement. Of them, two were nationally representative of U.S. children, two were gathered from multi-site studies of U.S. children, and last two focused on children either from Great Britain or Canada. The researchers focused on the relationship between school-entry skills (i.e., reading achievement, math achievement, attention, internalizing behavior problems, social skills, and anti-social behavior) and later math and reading achievement while controlling for children’s preschool cognitive ability, behavior, and other important background characteristics such as, socioeconomic status, mother’s education, family structure and child health. Their meta-analysis revealed that only three of the six sets of school entry skills and behavior are predictive of school achievement: math, reading, and attention. Further, early math skills were consistently a stronger predictor of later achievement compared to reading and attention (Duncan, et. al., 2007). Consistent with the educational attainment analyses (Duncan & Magnuson, 2009), early math achievement was found as the most powerful predictor of later school achievement (Duncan, et. al., 2007).

Even though young children are natural mathematicians (NRC 2009) and capable of developing some complex mathematical ideas (e.g., addition) and strategies (e.g., sorting by multiple attributes to analyze data), it is also true that they do not become skilled in mathematics without adult guided rich and intentional interactions with those foundational math concepts. This month, we are going to focus on three of these foundational math concepts (e.g., number sense, sorting and geometry) and how you can provide your youngsters with rich and engaging math experiences that offer for opportunities and structures for the development of deeper math understandings.