If you pull out the newspaper, you can show the children the map of the United States and explain how each of the states has a say in who becomes the President.  You might show them that more states were RED but more people in fewer states were BLUE.  When you simply look at the map, it looks overwhelmingly RED, but the more populous cities are in the BLUE states. 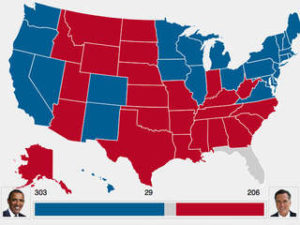