The last few paragraphs of Chapter 2 “Objectives for Teaching Number” describe how children come to understand the representation of number concepts as well as the differentiation of symbols and signs.

Kamii writes that once the child has the concept of the number seven, s/he can then learn that the number seven can be represented by either symbols or a sign.  Symbols are figurative representations of a number such as tally marks and the sign for seven is the numeral 7.  Recognizing the signs that represent number concepts (numerals) may come before the child is able to represent those same number concepts with symbols. That means you may think that the child has mentally constructed a concept for the number 7 but what she has done instead is memorized the sign for the number 7.  These are two very different things.

Kamii goes on to say that early childhood teacher focus too strongly on the signs for numbers rather than the symbols.  Counting numbers is important and recognizing numbers is good but teachers should spend more time focusing on the mental construction of number concepts through symbolic representations rather than through memorization of word series or numerals. 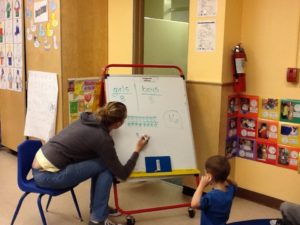 I have posted this picture before but I am re-posting it because I think it speaks directly to the above argument.  The teacher is not focusing solely on numerals and counting.  She is actively representing number concepts through symbols.  See how she uses pictures to represent each boy present in class and another to represent each girl in class.  When the children make the connection that each symbol represents each child and all of the symbols together represent a quantity, they are developing number concepts that are deeply rooted in logico-mathematical knowledge rather than the social construct of numeral recognition.