Over the years, I have blogged about 100+ kinds of manipulatives, from the homemade variety to the expensive stuff, from the kinds designed for toddlers to tools for early school-aged children.  I really like interesting, diverse, multidimensional tools that can be used in a variety of ways and for many developmental levels.

Today, let’s take a look at how tools are used to support mathematical understandings and how tools can be misused so they are not really effective in terms of meeting early math outcomes. 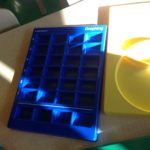 Here you can see a few sorting trays designed so that children can create, extend, and copy patterns (green tray), sort and organize items by attribute (yellow tray), and graph (blue tray). 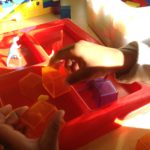 These all come in a set and are beautifully made, large enough that children can use smallish items with them but not so smallish that they present choking hazards.

So, if you had these in your room, how would you use them?

The day I saw these in a Head Start classroom, they were sitting out on a table with several bins of small manipulatives nearby.  A few children were playing with them and from my observations, it was clear that they did not know or understand the purpose of the trays.  They were using each tray much the same way they might use a plastic plate, as a receptacle for putting the toys, storing the toys, and moving the toys around.  The teacher never came over and neither modeled how to use the trays nor explained how to use them.

Here you can see how one child was putting dinosaurs into the spaces of the tray in a disorganized fashion.  At no time did a teacher support his play by suggesting alternatives, or sitting next to him and encouraging more purposeful use of the materials. 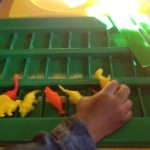 It reminds us that our role as “set designer” and “provocateur”  demands that we do not put materials out in a haphazard fashion but systematically think about our curricula, materials and environment in thoughtful ways.  We  must observe the children to know where they are developmentally and what they need from us so we can support their growth.

These tools are not meant to be put out on a table at the same time without direction.  They are meant to be used to support developing mathematical competencies.  That is NOT to say that young children should not use them to play.  Of course they should.  In fact, before I used them for their designed purpose, I would allow  the children to explore the trays, one at a time, over a period of time, to see how they explore them organically, without direction.  Eventually, I would take one over to group time and show the children how they can make patterns in the green tray or sort items in the yellow tray.  I would show examples and sit at the math table and work on patterns with the children, creating them and asking the children to extend them.  I might ask children to create their own patterns and see if I can extend them. I would set out very specific manipulative that have 2 or 4 attributes so they can be easily distributed in the sorting trays.

I would set the scene and facilitate the play.  I would use math language throughout these interactions and make it fun.  I would show excitement about the challenges these trays present and pose thoughtful and stimulating questions that the children could answer.  I would encourage the children to “try” and get excited at their efforts.

In short, I would do my job by being the best, most thoughtful teacher I could be.

Think before you set up your materials and arrange your space.  How are you going to be the best teacher you can be?