Young children love it when an adult sits down and reads a book to them, carefully studying the illustrations before the adult can turn the page.  Why not seize these opportunities as a way to introduce or reinforce mathematical concepts?  There are four reasons why I like to use children’s literature as a mathematical resource:

When I read The 3 Little Pigs to a child, we discuss how many pigs there are and how each one has a way to solve the problem of how to prevent the wolf from blowing down their house.  Even though pigs can’t really talk or build a house, the young child begins to understand the idea of a problem and solution as well as the lesson that sometimes we have to go back and try a new solution.

In the book, Pete the Cat and His Four Groovy Buttons (Litwin, 2012), Pete the Cat sings a song about his four buttons.  But as he loses one button at a time, he alters his song to include three buttons, then two, then one.  Young children can see, and hear, how Pete the Cat uses math in his everyday life by counting the remaining buttons each time he loses one.

When I would read the book, The Doorbell Rang (Hutchins, 1986), to my primary students, we used little chocolate chip “cookies” cut out of brown tagboard and small paper plates to act out the story.  On the first page, Mom makes 12 cookies for Victoria and Sam to share.  This provides an opportunity for children to talk about how to distribute the 12 cookies on the two plates and then how to make sure the same number of cookies is on each plate.  Throughout the story, more children come to the house to share the 12 cookies, which are continuously distributed evenly among the growing number of children.

In the 12 years I have been teaching math methods for the pre-service teachers at Elmhurst College, the teacher candidates are always amazed at the number of children’s literature books used to teach mathematical concepts, from PreK through eighth grade.  I have also conducted workshops for preschool and kindergarten teachers, as well as for families of young children, who are also surprised at how easy it is to use literature to teach and reinforce mathematical concepts including counting, patterns, geometry and sorting. 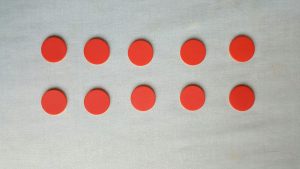 Young children learn to count to ten with meaning—they should not only be able to rote count from 1 to 10 but be able to count up to ten objects.  Adults and older children can become role models for counting and demonstrate the concept of cardinality, the awareness that the last number said is the total amount. When first introducing the concept of counting, use a book with the same objects on each page such as Ten Black Dots (Crews, 1986).  As you read each page and model how to count the number of black dots on each page, the child only has to pay attention to quantity since each object is the same size, color and shape.  Then practice counting up to ten circle counters so the child is only paying attention to the quantity. 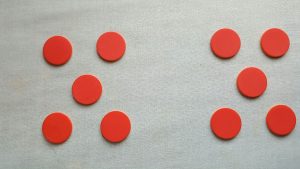 Once children are able to count objects that are the same size, color and shape, read a book such as Math Fables (Tang, 2004), in which animals are shown in different configurations along with a rhyming fable, from one spider up to ten beavers.  This book can be read to children again when they are ready to break down numbers and group them into more manageable and familiar amounts. 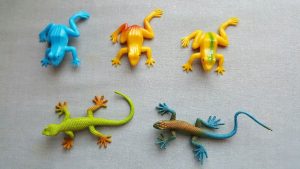 An activity that can follow this book can be counting familiar objects such as toys or food.  Allow the child to touch each object while counting, whether counting illustrations in the book or toys on a table.  The child should also be able to repeat the total number of objects.  For example, “One, two, three.  Three frogs.” 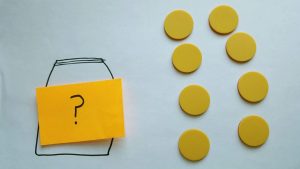 Once children can count up to ten objects, they can begin to learn the complements of ten (one and nine, two and eight, etc.) with the book Ten Flashing Fireflies (Sturges, 1995).  In this book, two children are outside collecting fireflies in a jar.  First there is one firefly in their jar and nine fireflies in the night sky.  Then they catch another firefly and two can be seen in the jar and eight in the night sky.  After repeated readings of this book, try playing a game in which some “fireflies” are in the jar and some are in the sky.  Show the number of fireflies in the sky and have children figure out how many are in the jar.  They can have ten counters of their own to help them figure out the math problem.

I hope you have as much fun as I do, reading children’s literature and creating related math activities to introduce and reinforce these counting and cardinality concepts.