Last week, when I wrote about math opportunities in everyday occurrences, I was reminded of a classroom teacher I observed about a year ago.  She was busy playing with one child at a long table.  They had 2 large foam die and were taking turns tossing them across the table. 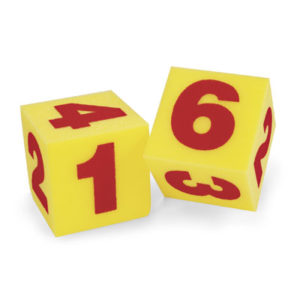 Each time they tossed the dice, the teach tried diligently to get the child to recognize and name the numbers.  She used her best teacher voice saying things like, “Ooooh, what number is that?  Can you count to 4?  Are the number the same?  Are they different?”  Not once did the child respond to her prompts.  He didn’t even look up or acknowledge her attempts at engaging him in the numbers.

I watched this interaction for a little while longer and came to the following conclusion:

If the teacher had been paying closer attention to the child’s cues, she would have noticed that he wasn’t rolling the dice to see which numbers came up.  He was rolling the dice to see how close he could get them to travel without falling off the edge of the table.  His game was about space and distance, about near and far, about staying on and not falling off.  His engagement with the dice was intense and exciting.  His game had rules and was fun.  His game didn’t include a relentless string of questions with right and wrong answers.

If the teacher had been paying closer attention she would have seen an opportunity for an authentic interaction between the two of them based on the genuine interests of the child.  She would have found many opportunities to encourage mathematical thinking, spatial recognition and math vocabulary.

Math opportunities exist in all areas of the early childhood classroom and in all sorts of adult-child interactions.  Playing with dice may seem like a super obvious example of an “opportunity” to explore number with a young child.  However, the obvious is not always the best choice.  Follow the child’s lead.  It may take you somewhere far more interesting.